Although people can live with irregular heartbeat, it can cause chronic fatigue and increase the risk of serious illnesses. 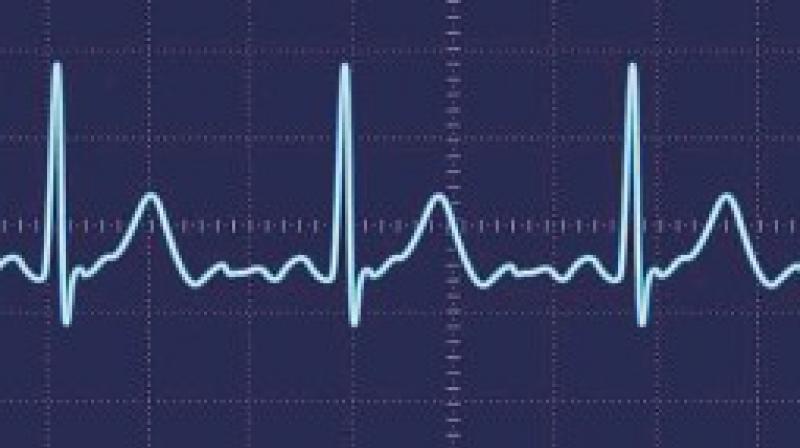 Fortunately, medication and other therapies are available to treat irregular heartbeat (Photo: AFP)

Washington: People with high thyroid hormone levels are at greater risk of developing irregular heart rhythm (known as atrial fibrillation) than those with lower levels.

"Our findings suggest that levels of the thyroid hormone, free thyroxine, circulating in the blood might be an additional risk factor for atrial fibrillation," said study lead author Christine Baumgartner. "Free thyroxine hormone levels might help to identify individuals at higher risk."

Symptoms of atrial fibrillation may include heart palpitations, dizziness, sweating, chest pain, anxiety, fatigue during exertion and fainting, but sometimes patients have no symptoms at all.

Although people can live with irregular heartbeat, it can cause chronic fatigue and increase the risk of serious illnesses, such as stroke and heart failure, potentially associated with lifelong disability and even death.

Fortunately, medication and other therapies are available to treat irregular heartbeat and reduce the risk of the associated symptoms and complications.

The thyroid gland is a small gland in the neck. In response to thyroid-stimulating hormone released by the pituitary gland, the thyroid gland secretes thyroid hormones required to regulate energy metabolism.

Patients with low levels of thyroid hormone, or hypothyroidism, may require medications containing thyroid hormone (thyroxine) to increase their hormonal levels. Sometimes intake of thyroxine sometimes can increase these levels too much.

Previous studies showed that the risk of irregular heartbeat is greater among individuals who produce too much thyroid hormone than among those with normal hormonal levels.

What was unclear, however, was whether levels that were high but still within the normal range could also increase the risk of irregular heartbeat.

To understand this relationship, investigators looked at the occurrence of irregular heartbeat among individuals with thyroid hormone levels that were still within normal range.

They found that individuals with higher blood levels of FT4 within the normal range at the beginning of the study were significantly more likely than those with lower levels to subsequently develop irregular heartbeat.

"So, an important next step is to see whether our results also apply to these patients, in order to assess whether target free thyroxine thyroid hormone concentrations for thyroid-replacement therapy need to be modified."

The investigators analyzed data from 11 studies from Europe, Australia, and the United States that measured thyroid function and the occurrence of irregular heartbeat.

Overall, the studies included 30,085 individuals. Their average age was 69 years, and slightly more than half were women. On average, follow-up ranged from 1.3 to 17 years.

The research has been published in the American Heart Association's journal Circulation.