Dressing up the warriors

In a freewheeling chat, designer Nachiket Barve talks about what went into creating authentic costumes for the film. 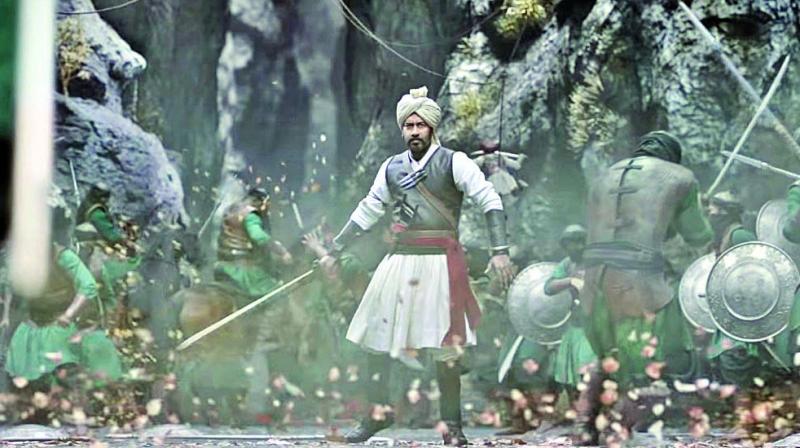 Still from the trailer

When the Tanhaji: The Unsung Warrior trailer was launched earlier this week, it suprised the audience with its eye-catching graphics and a promising story. With industry heavyweights like Ajay Devgan and Saif Ali Khan playing skilled warriors in the Battle of Sinhagad, Tanhaji has become the most awaited film of 2020. But when it comes to historical films, it’s not the places, dialogues, or factual accuracy, but the costumes that bring the era to life.

Giving insight into the costume creation process, fashion and costume designer Nachiket Barve, says the project involved several museum visits, sourcing materials, and research. “I really wanted to try and do a very authentic and realistic way of depicting costumes, so that it doesn’t look like a costume drama when you see the trailer; the clothes look like the age. We made them feel as real as possible,” he says. Talking about the research that he put in to accomplish historic accuracy, the 38-year-old explains, “The research involves multiple aspects, from visiting old museums and looking at their archival collection — everything from the Victoria and Albert Museum in London to museums in Maharashtra — to looking at paintings, books, and people’s personal collections.”

When it comes to movies, a costume involves everything from the outfit to the jewellery and even the right kind of bindi. To stay true to the era, Barve sourced the jewellery from Kolhapur. “We got the jewellery made using old moulds, almost 300-400 years old. There’s only one specialist in Kolhapur who has got the right moulds, and they made a lot of jewellery for us, keeping in mind the specific design and the making of the very old jewellery. So with Kajol’s look, everything looks authentic and it has something very old world about it. That’s what I wanted to recreate.”

As for the fabrics, the designer used vegetable dyes instead of synthetic colour to give it that 17th-century authenticity. He also had to pay attention to the flow of the materials, as the film is being released in 3D as well. “We picked fabric for Ajay Devgn’s clothes which would fall a certain way, which would react to light because it’s a 3D film. All that has to be kept in mind,” he shares.

Nachiket reveals that he also solicit help from the film’s director Om Raut, whom he credits for bringing clarity to the table. “As a director, Om has great clarity, and at the same time, he’s got a very strong vision. For us, it was a meeting of minds in that sense because both of us were speaking the same language — him from a directorial point of view, me from a costume point of view. There was great synergy on that front, the product always comes out better when everybody is on the same page,” he smiles.

With the designer’s focus on authenticity and detail, some historical elements were harder than others to incorporate into the costumes. Among them as Saif Ali Khan’s character Uday Bhan, who was a Rajput representing the Mughals. “The character has a graph in film, so I had to keep in mind his transition and story, and then also bring about the change of body language, clothes, and cultural reference. Everything comes into play and that is very important,” Nachiket explains. Saif’s armour in the film has a tonal, rugged look, which was created by reviving an old technique of leather punching.

The designer also dressed Kajol in a Maharashtrian Shalu and paired it with jewellery true to the era and the geographical region. “There’s a small special kind of ear ornament called the bugdi or a Kolhapuri saaj, which is a certain kind of necklace which married women from that era used to wear. So we’ve taken care of these little micro-details,” he says.

On the whole, Tanhaji was a special project for Nachiket. “It was a wonderful experience. We were shooting for an extended period, so you had to know people better. Also when you work with a star cast who is as accomplished as talented and they are also as professional and beautiful, there’s half the battle won,” he concludes.