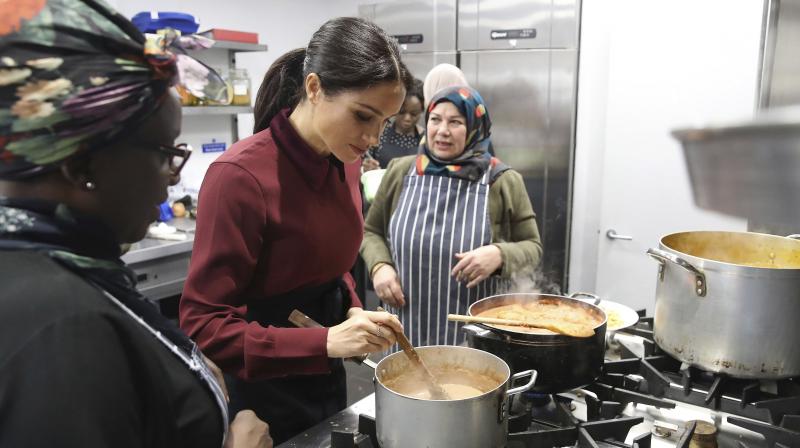 Meghan, Duchess of Sussex helps out during a visit to the Hubb Community Kitchen to see how funds raised by the 'Together: Our Community' Cookbook are making a difference at Al Manaar in London, Wednesday Nov. 21, 2018. (Photo: AP)

LONDON - Meghan Markle, the wife of Prince Harry, chopped vegetables and packed food into boxes on Wednesday as she returned to a London community kitchen project formed after the Grenfell Tower fire last year in which more than 70 people died.

Markle, officially known as the Duchess of Sussex, visited the Hubb Community Kitchen to see how proceeds from a charity cookbook she backed were being used. The project was set up by women looking for a place to prepare family meals following the June 2017 disaster.

“Together: Our Community Cookbook” is a collection of recipes from the users of the communal kitchen at the Al Manaar Muslim Cultural Heritage Centre in west London. It was published in September with a foreword written by Markle.

The book has sold “tens of thousands of copies”, according to Kensington Palace, and made the Sunday Times and New York Times Bestseller lists. The funds raised have been used to expand the project, including opening it seven days a week from two at the beginning.

Markle, who married Harry in May and is expecting their first child in the spring, donned an apron and disposable gloves as she began work in the renovated kitchen, chatting with women as they prepared meals for local delivery.

The 37-year-old American, a former actress, has visited the project several times this year.