Pedal your way to office for a stress-free life

Governments are increasingly promoting non-motorized alternative modes of transport due to concerns of traffic and pollution. 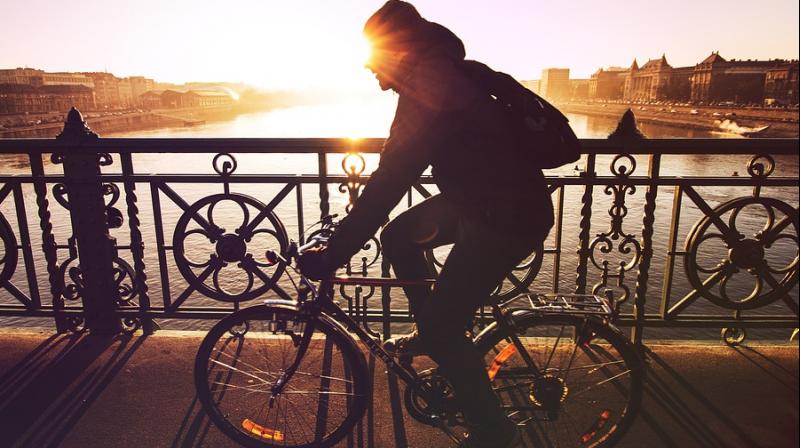 Washington:  Do you know! Your mode of transportation to office decides your stress quotient at work. A recent study suggests cycling to office can help reduce stress and improve your work performance.

Researchers Stephane Brutus, Roshan Javadian and Alexandra Panaccio compared how different modes of commuting - cycling, driving a car and taking public transport - affected stress and mood at work. Its results indicate that cycling to work is a good way to have a good day, says Brutus, the lead author. "Employees who cycled to work showed significantly lower levels of stress within the first 45 minutes of work than those who travelled by car," he says. The study did not, however, find any difference in the effect on mood.

The research team collected data from 123 employees at Autodesk, an information technology company in Old Montreal, using a web-based survey. Respondents replied to questions about their mood, perceived commuting stress and mode of travel. The survey differentiated between perceived stress and mood, a more transient state affected by personality traits and emotions.

The study only assessed answers from respondents who had completed the questionnaire within 45 minutes of arriving at work. This was done to get a more 'in-the-moment' assessment of employees' stress and mood. Brutus notes that this time specification was the study's major innovation. "Recent research has shown that early morning stress and mood are strong predictors of their effect later in the day," he explains. "They can shape how subsequent events are perceived, interpreted and acted upon for the rest of the day."

He adds that the time specification ensured a more precise picture of stress upon arrival at work. Retrospective assessments can be coloured by stressors that occur later in the workday.

The advantages of cycling. "There are relatively few studies that compare the affective experiences of cyclists with those of car and public transport users," says Brutus, an avid cyclist himself. "Our study was an attempt to address that gap." At the same time, the team confirmed previous research that found that cyclists perceived their commute as being less stressful than those who travelled by car.

Cycling has been shown to be a relatively inexpensive mode of transportation and a good form of physical activity. A 2015 study from the Institute for Transportation and Development Policy found that cycling could help reduce CO2 emissions from urban passenger transportation by 11 per cent by 2050. It could also save society US$24 trillion globally between 2015 and 2050.

Brutus points out that 6 per cent of Canadians cycled to work in 2011 and the number is only growing. However, Canada still lags behind many European countries. There is potential for public policy makers to seize on this, he adds.

"With growing concerns about traffic congestion and pollution, governments are increasingly promoting non-motorized alternative modes of transport, such as walking and cycling. I can only hope that further studies will follow our lead and develop more precise and deliberate research into this phenomenon." The study was published in the International Journal of Workplace Health Management.