This protein consumption can slow down healing of fractures 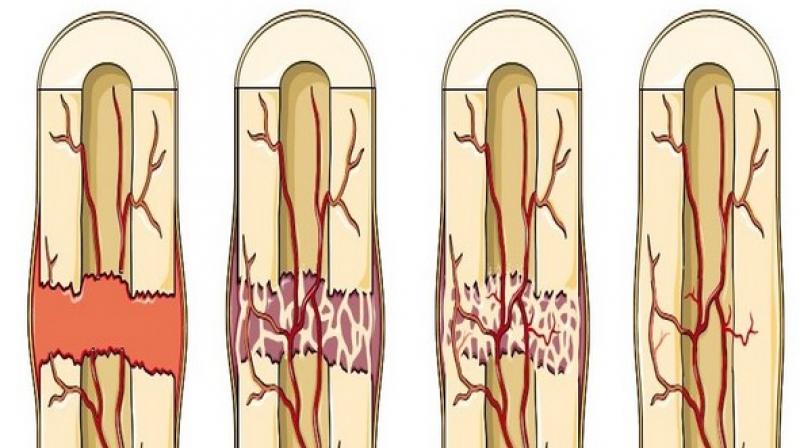 When you break a bone, your body sends signals through the bloodstream to recruit cells to fix it. (Photo: ANI)

Washington: Researchers have found that a few proteins which are more prevalent in older people prevent the fractured bones from healing.

Duke Scientists hope this discovery will lead to new treatments to help people heal after injuries or surgeries.

"When we decreased the protein level, aging was reversed," said senior author Gurpreet Baht, Ph.D. and assistant professor in the Duke Department of Orthopaedic Surgery. "Not only was there more bone and healing happened faster, but it was also structurally more sound."

They wanted to figure out if and how ApoE affects the multi-step process of bone healing.

When you break a bone, your body sends signals through the bloodstream to recruit cells to fix it.

At last a different kind of cell eats up the cartilage scaffolds and osteoblasts fill those holes with bone.

"Over time, this cartilage will continue to be resorbed and osteoblasts will continue to deposit new bone," Baht explained. "After a few months of your arm or leg healing, there will be almost no cartilage anymore. And if you were to look at it five years out, there'd be no sign of an injury anymore."

That's if the bone healing process works perfectly. But the researchers found that if they added ApoE to a petri dish with skeletal stem cells, fewer cells developed into osteoblasts and the osteoblasts were worse at building bones.

"We wanted to see if the cell population was more or less capable of becoming osteoblasts," Baht said. "[Normally,] you put these cells down in a petri dish for about a month and the dish becomes so hard that you can't even scratch the surface because they've made two-dimensional bone there. ApoE-treated cells are still able to do this, they just don't do it as much or as well."

Next, the researchers created an intervention by injecting a virus which keeps mice from making Apolipoprotein E. Circulating ApoE levels dropped by 75 per cent and the healed bones contained one and a half-times more strong, hard bone tissue than bones of untreated mice.

The research was supported by the Duke Centre for the Study of Aging and Human Development and Claude D. Pepper Older Americans Independence Centre, the Pathway to Stop Diabetes Initiator Award from the American Diabetes Association and a Borden Scholar Award.