COVID case fatality rate in India on a steady decline, drops to 2.46 pc

In India, AIIMS began Phase 1 of human trials of COVID-19 vaccines on Monday, results of which are expected in three months 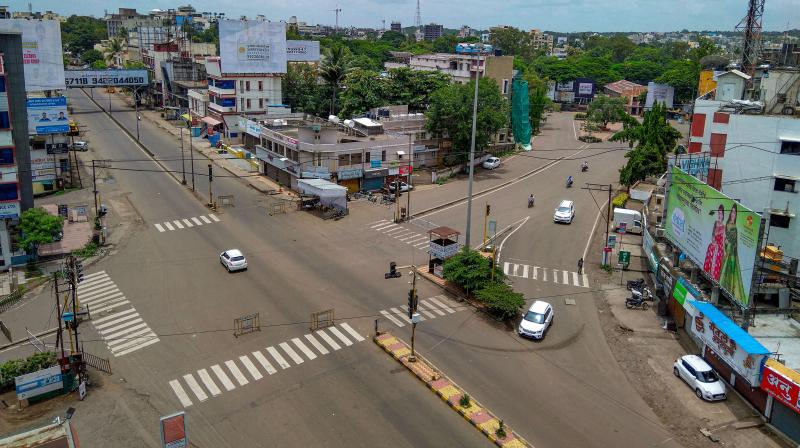 Few vehicles ply on roads after a total lockdown was imposed due to surge in the COVID-19 cases, in Kolhapur. PTI photo

New Delhi: According to the Union Health Ministry, the case fatality rate in India continues to register a steady decline and has dropped to 2.46 per cent on Monday. Officials said India has one of the lowest case-fatality rates in the world

In India, where daily rising COVID-19 numbers are a major cause of concern, AIIMS began Phase 1 of human trials of COVID-19 vaccines on Monday, results of which are expected in three months.

This is the sixth consecutive day when COVID-19 cases increased by more than 30,000.

Nine fatalities have been reported from Rajasthan, followed by eight in Punjab, seven in Telangana, six each in Haryana and Odisha, four in Jharkhand, three in Uttarakhand, two each in Tripura and Meghalaya, and one each in Assam, Goa, Chhattisgarh, Kerala and Puducherry.

According to Indian Council of Medical Research (ICMR), a cumulative total of 1,43,81,303 samples have been tested up to July 20 with 3,33,395 samples being tested on Monday.

The health ministry stressed that more than 70 per cent of the deaths occurred due to co-morbidities.

Nagaland has recorded 1,021 COVID-19 cases, Arunachal Pradesh 790 Chandigarh 737 and Dadra and Nagar Haveli and Daman and Diu together have reported 684 cases. Meghalaya has reported 466 cases and Sikkim 305 cases.

Mizoram has registered 297 infections so far, while Andaman and Nicobar Islands has recorded 207 cases.

Health Economist Riju M. John said such single-day spikes are a “worrying trend” and if this trend continues it can put severe pressure on hospital infrastructure and potentially increase the mortality rates.

According to his calculations, the daily cases are expected to hit 60,000 to 65,000 by the second half of August. He added the daily growth rate of active cases has been growing steadily over the past two weeks and has now surpassed the growth of total cases.

Another Economist Prof Shamika Ravi said active cases are now growing at the rate of 4.1% which means India will have 7.8 lakh active cases by August 6. “Containment policy clearly failing in several states,” she said while adding Bihar infection growth is much faster at 10% than all India 4.1% and the deaths are faster too – 3.1 % compared to 2.4% all India.

She said Bihar is not testing enough. A central team is in Bihar to monitor the situation and assist the state government in disease management.

Delhi, which has shown an impressive recovery, now has a recovery rate close to 85 %, with active cases just 12 %. In Delhi, more than 50 % of all the infected persons are recovering in-home isolations.

AIIMS Director Dr Randeep Guleria said certain areas of the city have hit their peak in Covid-19 cases while some areas are yet to reach the peak. He added that there is not much evidence of community transmission happening at the national level but there are hotspots in different cities where there is a spike of cases and it is very likely that local community transmission in those areas is happening.