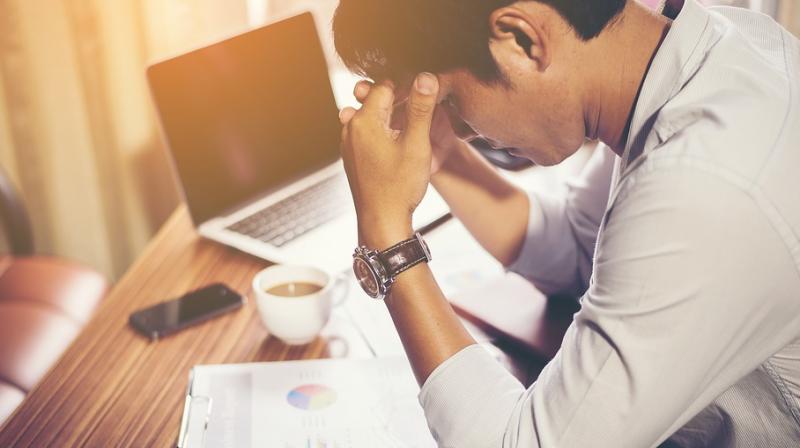 14 per cent of India's total population are in high-stress zone and needed expert intervention. (Photo: Pixabay)

New Delhi: Has your mind been preoccupied with negative thoughts lately? Do you feel irritated time and again? A new study suggests that you might be suffering from
stress. Conducted by YourDost, an online counselling and emotional wellness portal, the study notes "negative thinking is one of the major symptoms of stress".

While highlighting that psychological issues like stress are often neglected and ignored, it reveals that in 50 percent cases "irritability" and "pessimistic thoughts" are
indicative of the onset of stress, along with other manifestations in mannerisms like irregular eating and sleeping habits."41 per cent of the participants felt their sleeping and eating habits changed when they were stressed. 39 per cent of people showed temperament changes.

"Reduction of productivity was observed in 36 per cent, while overwhelming feelings and self-criticism increased in about 35 per cent of the participants," says the study.
Attributing the rising levels of stress to changing lifestyles, psychologist Shruti Singhal says an incompatibility between personalities and environments also contributes towards increased stress levels. "Stress levels are rising in every walk of life. We
encounter daily cases of people breaking down under the pressures of highly competitive and demanding academic, professional and lifestyle stressors.

"In addition to that, the emotional and social fabric of the society has become very fragile. Issues like break ups, family/marital discord, loneliness have only added to the
emotional breakdowns. Introversion and shyness in a social set up where extroverted characteristics are sought after," she says.The study also points out that "14 per cent of India's total population are in high-stress zone and needed expert intervention" and 58 per cent of these people are inclined to consult a counsellor.

"While only 6 per cent of these stress-affected individuals actually talked to a psychologist, the rest 52 percent resorted to listening to music and sleeping to de-stress
themselves," it says. In another interesting finding, the study says that more number of women were stressed in the country compared to men, adding that "singles and unmarried people" find it easier to cope with stress than married couples.