Here's how saying thank you can help ease depression

Scientists have discovered that ‘gratitude therapy’ has a powerful impact on aspects of both mental and physical health. 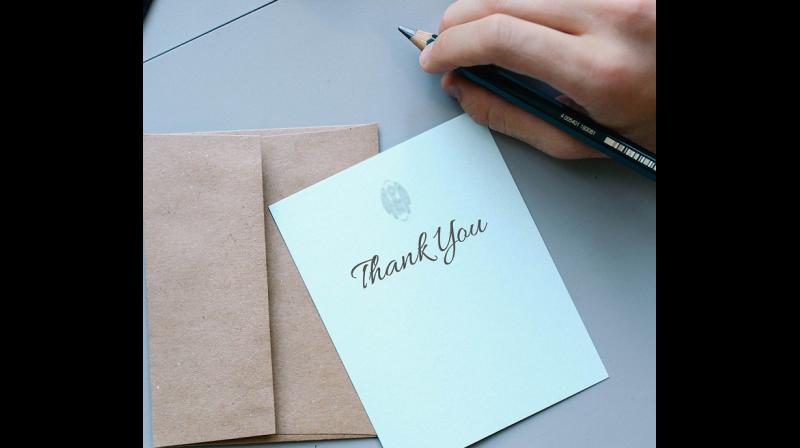 The latest study looked at whether gratitude therapy could be used to get teenagers to ditch junk food and eat healthy.

While, as youngsters, all of us have learnt to say thank you, a recent research now highlights why we should al be making an effort to do it. It turns out saying thank you could work wonders for our health.

Scientists have discovered that ‘gratitude therapy’ — deliberately expressing thanks, for instance to parents, teachers or friends for their support — has a powerful impact on aspects of both mental and physical health.

It turns out that simply writing a thank-you letter has such a strong impact on psychological wellbeing, it has a knock-on effect on physical health.

The latest study looked at whether gratitude therapy could be used to get teenagers to ditch junk food and eat healthy.

The research conducted by scientists at the University of California, Riverside got students to spend at least eight minutes writing a thank-you letter, once a week for four weeks, to someone in their life who had been strong and supportive.

After four weeks, the researchers compared their eating habits with another group who had only been told to list their daily activities.

The results, published in the Journal of Experimental Social Psychology, showed that those expressing gratitude were more likely to switch to healthier food — eating more fruit and vegetables and having fewer sugary drinks — during the experiment, while those simply recording what they did each day made no changes.

Gratitude therapy has also been shown to reduce pain and help women with breast cancer ease their anxieties.

It can help with depression, too, as a 2016 study at Indiana University in the U.S. found.

The results, published in the journal Psychosomatic Medicine, revealed those keeping the journal had reduced inflammation in the blood vessels and increased heart rate variability, suggesting their hearts were in better shape.