This enzyme may prevent streptococci infection 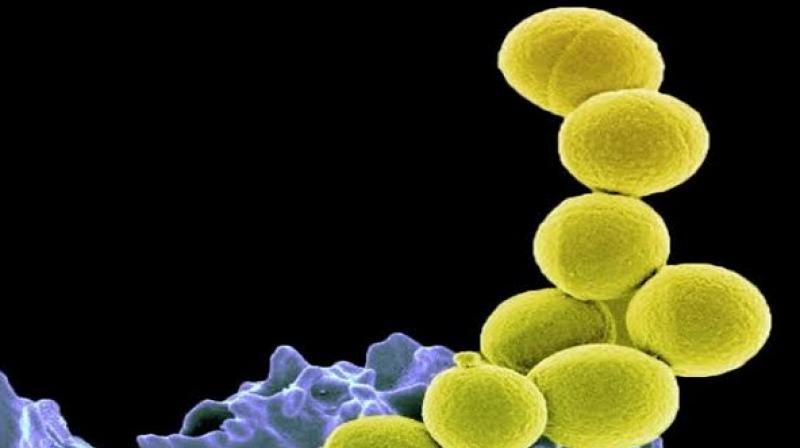 Antimicrobial resistance is a global problem, and existing antibiotics fail to work in around 20 per cent of cases of strep throat. (Photo: ANI)

Washington: Researchers have found an enzyme that could prevent a deadly streptococci infection that causes around 500,000 deaths worldwide each year. Group A Streptococcus can lead to illnesses such as strep throat, scarlet fever, sepsis, and toxic shock syndrome as well as several long-term autoimmune diseases with high mortality rates.

Working with colleagues at the University of Edinburgh and the Russian Academy of Sciences, the Dundee researchers found an enzyme that is required to produce a carbohydrate on the surface of the streptococcal bacterium which enables it to infect humans and animals.

The team, led by Dr Helge Dorfmueller, is based in the Division of Molecular Microbiology at the University's School of Life Sciences. Their research reveals new opportunities to inhibit this enzyme and, ultimately, fight Group A Streptococcus infections. The fact this enzyme works through a novel mechanism of action that can also be found in other streptococcal species increases the impact and relevance of this finding.

"Strep throat is the most common Group A Streptococcus infection and can often be fought by the body's immune system. Unfortunately, the very same bacterium also causes a plethora of severe and potentially fatal illnesses, such as sepsis and toxic shock syndrome," said Dr Dorfmueller.

"We knew that the carbohydrate coating was an essential component of Group A Strep, but we wanted to find out more about how this worked. What we have now shown is that the enzyme initiates the synthesis of the bacterial coating," continued Dr Dorfmueller.

"Surprisingly, we also found that this enzyme fulfils the same function in many other types of streptococci. This includes Group B Streptococci, that can cause severe infections in newborns, and Group C and G Streptococci that cause similar disease as Group A, including bacteraemia and endocarditis, in humans and animals," added Dr Dorfmueller

The newly discovered enzyme is not present in humans or animals, therefore providing a novel opportunity for drug discovery programmes, reported the study published in the 'Journal of Biological Chemistry'.

Antimicrobial resistance is a global problem, and existing antibiotics fail to work in around 20 per cent of cases of strep throat. The long-term aim of the Dundee team is to aid the development of a new class of antimicrobial drugs that could completely inhibit or reduce the enzyme's activity.

The next step towards this goal will see them work with the University's Drug Discovery Unit to develop compounds that could target this enzyme. The research was jointly led by PhD student Azul Zorzoli and Ben Meyer, a former postdoc in Dr Dorfmueller's lab. Azul explained, "In our recent study, we show how this protein initiates the production of this carbohydrate through a mechanism never described before."