Ignoring your child’s complaints of joint pain could have serious consequences in the long run. 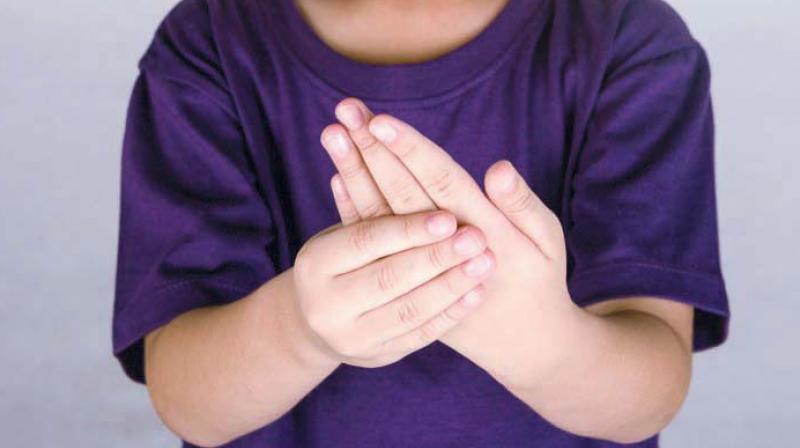 Knowledge about this disease is limited among parents and even the medical fraternity. many are surprised to hear that even children can develop arthritis because the general perception is that a growing child cannot have such problems. That’s why diagnosis of the disease is delayed.

Do you find that your child isn’t as active as other kids and often complains of fatigue? Does he or she frequently suffer from pain in the joints? Maybe it’s time to consult a rheumatologist, your child could be suffering from juvenile arthritis, a condition that exacerbates when left undiagnosed and untreated.

Symptoms of juvenile arthritis are often taken to be signs of weakness or malnutrition. But it is actually caused by an inflammation of the joints or vital organs of the body, which can cause chronic pain, explains Dr V. Sarath Chandra Mouli, a senior rheumatologist at KIMS Hospital.

Q. Why do some children develop juvenile arthritis?
The exact cause of juvenile idiopathic arthritis is not known, nor are the triggers for this autoimmune disease well-understood. Research has shown that it could result from genetic, environmental or immunological causes.

Q. Why is this condition often left undiagnosed?
Knowledge about this disease is limited among parents and even the medical fraternity. There are many who are surprised to hear that even children can develop arthritis because the general perception is that a growing child cannot have such problems. That’s why diagnosis of the disease is extremely delayed. We only have 600 rheumatologists in India, while we require 20,000. For children, paediatric rheumatologists are needed at children’s hospitals.

Q. What are the symptoms of juvenile arthritis?
The symptoms are joint pain, swelling, redness of the joints, early morning stiffness, fever, and red rashes on the skin.

1. Systemic arthritis which affects the joints as well as internal organs like the heart, spleen, liver and lymph nodes but not the eyes.

3. Polyarticular arthritis affects the joints of the jaw, neck, hands and feet. This is mostly seen in girls.

4. Psoriatic arthritis in which the child has a skin disorder called psoriasis along with arthritis. Children with this type of arthritis often have pitted fingernails.
5. Enthesitis-related arthritis which affects the spine, hips, and tendons of the back. This is mostly seen in boys.

Q. Which type of arthritis is most common in India?
The most common type of arthritis in India is oligoarthritis, it has an incidence of 1 in 1,000 people. In India, we find this condition is more common in females than it is in males. In this type of arthritis, complications can affect the eyes. It can be one of the major reasons for the early development of cataract, glaucoma and macular degeneration. If not diagnosed in time, it can lead to blindness. For this reason, children with juvenile arthritis are asked to get their eyes checked, as it’s important to secure their vision.

Q. Is juvenile arthritis reversible? Will a child carry it into adulthood?
Remission of arthritis is observed in a few cases. There isn’t a lot of data on the subject, so we’re yet to understand which category of children have a higher chance of remission.

Q. How is JA treated?
The medications prescribed are usually pain-killers, oral immune-modulation therapies, oral low-dose steroids, and local steroid injections. The side-effects of these drugs must be monitored regularly. A high dose of steroids is not recommended, but it may be prescribed based on an evaluation of risk versus benefit. A child diagnosed with the condition also requires regular physiotherapy and exercise.

Q. Can JA become a life-threatening condition?
Ten per cent of JA patients develop a complication called macrophage activation syndrome (MAS), which is a very serious condition. The trigger is often a viral infection or the side-effect of a medication. MAS can lead to liver dysfunction, and in many cases, it is found to decrease the function of natural killer cells. It requires aggressive treatment.