Not all kidneys get the same benefits from dietary compounds, they depend on genetics. 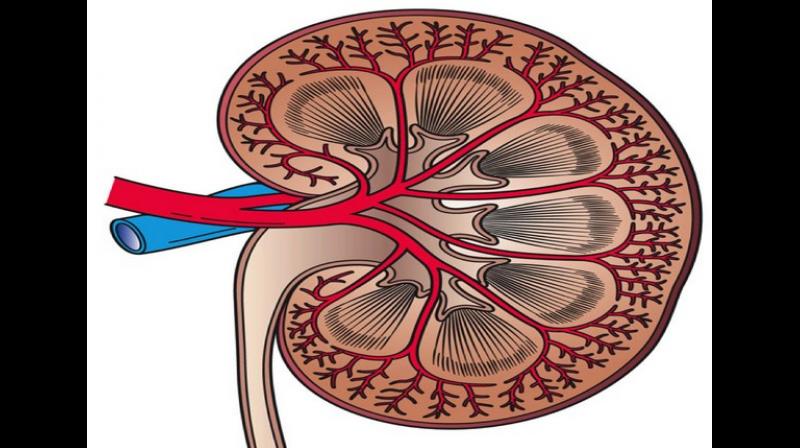 The study highlights diet-gene interactions in kidney disease and illustrates that response to the disease-modifying effect of diet is influenced by genetics. (Photo: ANI)

Washington: A recent study suggests that not everyone's kidney gets benefited from the dietary compound they consume, instead kidney health may depend on an individual's genetics.

The findings, which appeared in an upcoming issue of - JASN --, may be helpful for tailoring interventions to prevent or treat kidney disease.

Glutathione S-transferase mu-1 (GSTM1) is an enzyme that plays a role in ridding the body of toxins and combating oxidative stress.

Many individuals carry a variant in the GSTM1 gene that prevents the gene's expression (called a null variant) and therefore they lack the production of the enzyme.

In their latest study, the investigators found that the deletion of the gene increases kidney injury in mice with hypertension and kidney disease.

Supplementing the diet with broccoli powder (which is rich in an antioxidant-activating compound) significantly lessened kidney injury in the genetically altered mice, but not in normal mice with kidney disease.

"We speculate that the GSTM1 enzyme may be involved in the breakdown of antioxidant-promoting compounds, and therefore a deficiency in the enzyme may increase the bioavailability of protective compounds relevant in kidney disease," said Dr Le.

When the researchers examined the information from a large clinical trial, they found that high consumption of broccoli and other cruciferous vegetables was linked with a lower risk of kidney failure, primarily in participants with the GSTM1 null variant.

"Our study highlights diet-gene interactions in kidney disease and illustrates that response to the disease-modifying effect of diet is influenced by genetics," said Dr Le.

"In the context of personalized and precision medicine, increased consumption of cruciferous vegetables may be protective, particularly in those lacking GSTM1 who are genetically most at risk for kidney disease progression. Furthermore, our study suggests that knowing an individual's genetic information enables tailoring an intervention to prevent or delay kidney disease progression among those who would respond based on their genetic makeup," concluded Dr Le.