During this second wave, 2 per cent tested positive among those 65 or older who had previously not had COVID-19 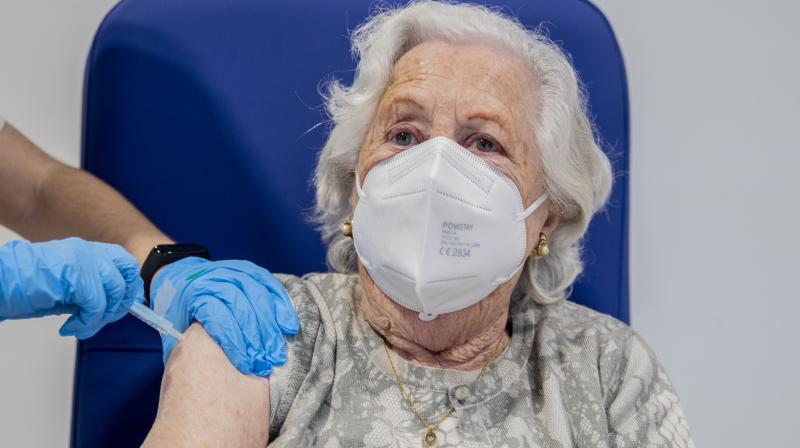 The rate of infection was five times higher, at 3.3 per cent, among those who returned a positive test during the second wave having previously tested negative. (AP/Manu Fernandez)

London: While most people who have had COVID-19 are protected from catching it again for at least six months, elderly patients above 65 years of age are more prone to  reinfection, says a new study published in The Lancet journal.

The scientists from Denmark's Statens Serum Institute analysed data collected as part of the country's national COVID-19 testing strategy, through which more than two-thirds of the population (four million people) were tested in 2020.

According to the scientists, while prior infection gave those under the age of 65 years around 80 per cent protection against reinfection, for those 65 and older it conferred only 47 per cent protection, indicating they are more likely to catch COVID-19 again.

In the study, the researchers calculated the ratios of positive and negative test results taking account of differences in age, sex, and time since infection, using which they produced estimates of protection against reinfection.

Among people who had COVID-19 during the first wave between March and May 2020, they said only 0.65 per cent tested positive again during the second wave from September to December 2020.

The rate of infection was five times higher, at 3.3 per cent, among those who returned a positive test during the second wave having previously tested negative.

Among those under the age of 65 who had COVID-19 during the first wave, 0.60 per cent tested positive again during the second wave, the study noted.

However, the rate of infection during the second wave among people in this age group who had previously tested negative was 3.60 per cent.

The researchers noted that older people are at greater risk of reinfection, with 0.88 per cent of those aged 65 or older who were infected during the first wave testing positive again in the second wave.

During this second wave, 2 per cent tested positive among those 65 or older who had previously not had COVID-19, the study noted.

Due to the time frame of the study, the scientists said it was not possible to estimate protection against reinfection with COVID-19 variants, some of which are known to be more transmissible.

They said further studies are needed to assess how protection against repeat infection might vary with different COVID-19 strains.

Based on the analysis, the researchers suggested that people who have had the virus should still be vaccinated, as natural protection -- particularly among the elderly -- cannot be relied upon.

They believe the findings highlight the importance of measures to protect elderly people during the pandemic, such as enhanced social distancing and prioritisation for vaccines, even for those who have recovered from COVID-19.

"Our study confirms what a number of others appeared to suggest -- reinfection with COVID-19 is rare in younger, healthy people, but the elderly are at greater risk of catching it again," said study co-author Steen Ethelberg, from the Statens Serum Institut.

"Since older people are also more likely to experience severe disease symptoms, and sadly die, our findings make clear how important it is to implement policies to protect the elderly during the pandemic," Ethelberg said.

Citing the limitations of the study, the researchers said clinical information was recorded only if patients were admitted to hospital, adding that it was not possible to assess whether the severity of COVID-19 symptoms affects patients' protection against reinfection.

The scientists said there was no evidence yet that protection against repeat infection with COVID-19 waned within six months.

Since COVID-19 was only identified in December 2019, they said the period of protective immunity conferred by infection has still to be determined.

"In our study, we did not identify anything to indicate that protection against reinfection declines within six months of having COVID-19," said study co-author Daniela Michlmayr.

"The closely related coronaviruses SARS and MERS have both been shown to confer immune protection against reinfection lasting up to three years, but ongoing analysis of COVID-19 is needed to understand its long-term effects on patients' chances of becoming infected again," Michlmayr added.