Women suffering from MRM might experience dullness followed by mood swings and severe headaches prior to menstruation. 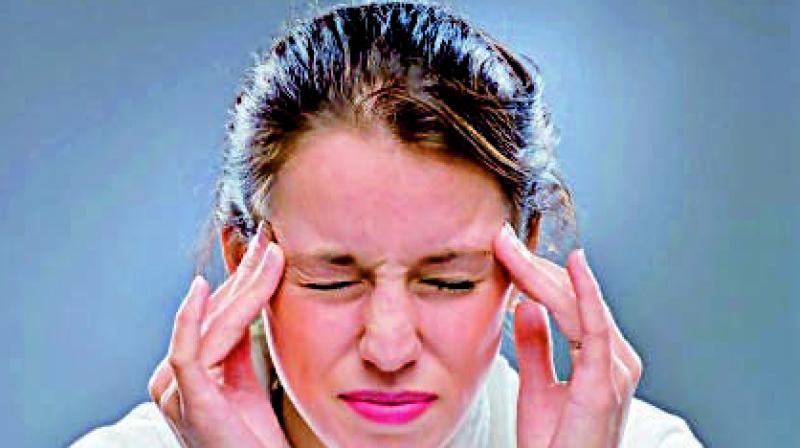 Migraines affect thrice the number of women as compared to men and migraines triggered by hormonal fluctuations are found to be the case in 50 per cent of the women who have reported this problem. “Migraines caused by menstruation  occur two to three days before the onset of periods. Women may experience dullness followed by mood swings and then headaches. The management of the disease depends on one’s ability to comply with medication and therapy. It is important to ensure that one does not develop resistance to the drugs,” explained Dr V. N. Mathur, senior consultant neurologist.

What triggers MRM?
The triggers for migraine and MRM are often the same. Its most common triggers are bright light, loud sound, strong smells, and stress, all of which are found to trigger migraine attacks as well. The other factors noted include not eating timely meals which causes glucose levels in the blood to drop. An uncommon trigger noted in 60 per cent of the women is when they opt for a head bath and then complain about headaches. In these cases, it has been noted that dry scalp can trigger headaches. These women have been advised to apply two drops of oil along the center of their scalp and massage the area gently to prevent headaches.

It has been found that women in their pre-menopause and menopause stages experience headaches that begin from the back of the head and move over to the front and upper body? Why does this happen?
Moving headaches are due to low levels of estrogen and serotonin. In some women, it has been found that headaches begin at the back of the head and move down to the neck and shoulders. These cases are often misdiagnosed as cervical spondylosis. The symptoms begin three to four days prior to the onset of periods and the pain becomes severe and radiates from the head to the upper body.

Those suffering from it may experience anger and mood swings. There is also a possibility of self-harming behaviour as the pain is often unbearable. Although it is an episodic reaction, we highly recommend taking a dose of a non-steroidal anti-inflammatory drug when the symptoms begin to show. This is for those who have extremely severe headaches. There are different medications for the various kinds of headaches and it is critical that the patient is properly counselled.

Is abuse of NSA drugs in migraines noted?
Yes, five per cent of the cases have noted overuse of NSA drugs. It becomes critical to hospitalise patients in such cases in order to flush out NSA drugs from their system, which takes the treatment to a whole new level and can put the patient to the risk of side effects from the steroids.

Do patients suffering from migraines require hormone replacement therapy?
A very small portion of the MRM patients, who experience very severe migraines that are resistant to treatment, will require hormone replacement therapy. PMS in such women leads to a severe dip in estrogen and serotonin levels. They may require a joint intervention by their gynaecologist and neurologist.

Episodes of anger, depression and severe anxiety are noted before the onset of a migraine. Is there a relationship between mood swings and migraine attacks?
Yes. However, in the clinical evaluation, we have found that only mood swings are being treated by psychiatrists. Most of these patients have untreated headaches. Such misdiagnoses often leads to the development of an untreated condition which becomes severe in these women during their pre-menopause stage. Hence, women who suffer from mood swings and menstruation-related migraines must understand that their issues are caused by an underlying neurological condition.

Is the treatment of migraines different at different stages of the disease?
Yes, and this is the most important aspect. Migraine in women is treated differently at different levels. Medication is prescribed according to the severity of pain and other related factors. The same individual might often show a variation in symptoms so it becomes critical to revise medication whenever required. Patients also need to understand that the overuse of drugs can cause resistance and that can become a challenge in the treatment of the migraine attacks which might occur through their pre-menopause and menopause phases.