The catwalk display ended with a multi-colour lighting spectacular, as Bailey waved goodbye to a standing ovation. 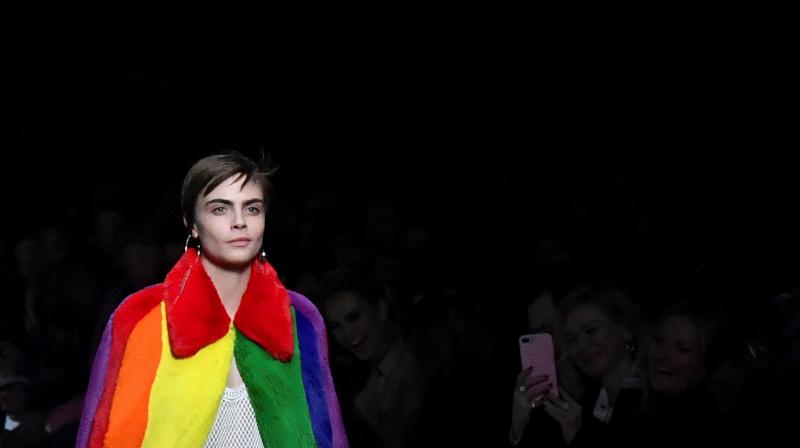 British model Cara Delevingne presents a creation from the Burberry collection during their catwalk show on the second day of London Fashion Week Autumn/Winter 2018 in London on February 17, 2018. (Photo: AFP)

LONDON: Burberry’s star designer Christopher Bailey bid goodbye to the British brand on Saturday with a colour-infused show, showcasing designs with a rainbow twist on the label’s famed check print on a catwalk lit with laser beams.

Bailey is leaving Burberry after 17 years, during which time he helped propel the brand, known for its trench coats and camel, black and red check, into a label of global prominence.

His last collection, unveiled during London Fashion Week at a giant warehouse that once served as a bus depot, featured a youthful, street culture vibe, from slinky tracksuits to fleecy oversized hoodies paired up with voluminous skirts.

Bold colours dominated the designs, from the chunky knitted sweaters with geometrical patterns to the rainbow checks featured throughout, in a celebration of the symbol of the lesbian, gay, bisexual, and transgender (LGBT) community.

The catwalk display ended with a multi-colour lighting spectacular, as Bailey waved goodbye to a standing ovation.

“It’s quite poignant, there’s people I’ve worked with here since the beginning of my career. It’s been a very special night,” Bailey told Reuters after the show. “The company has got such incredible things ahead and I‘m excited now to be able to watch Burberry continue to flourish and fly.”

Bailey is stepping down from Burberry’s board at the end of March and will lend support to the brand’s management until the end of 2018. He said he would be spending time out with his family but was also open to other moves.

“I‘m just speaking to lots of people, there’s lots of fun exciting projects out there. So we’ll see, I‘m not in any rush at all,” Bailey said.

British model and actress Cara Delevingne, one of the faces of Burberry campaigns, closed the runway show in a flowing striped rainbow cape.

Angela Ahrendts, who was Burberry chief executive between 2006 and 2014 and is now a senior executive at Apple, said she had been “honoured” to work with Bailey, and returning to see his final show had been a “bitter-sweet” experience.

“He is one of the greatest visionaries in the world,” Ahrendts said, wearing a white Burberry shirt with a safety pin neck fastening.

Bailey’s replacement has yet to be announced. Burberry is in the midst of a strategy overhaul under CEO Marco Gobbetti aimed at taking the brand more upmarket.