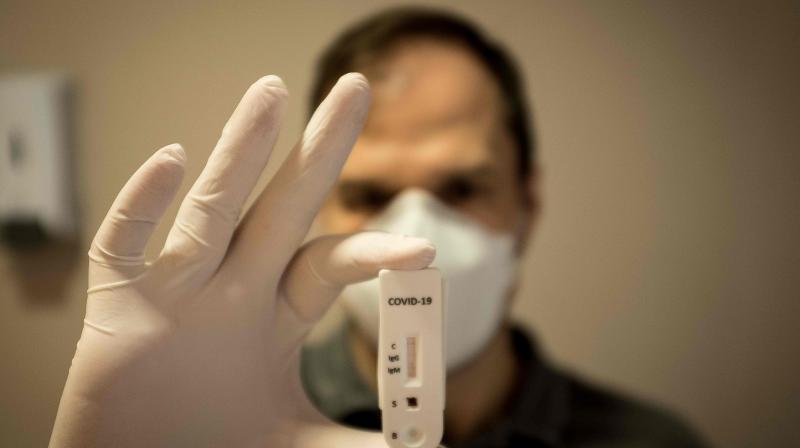 Washington: The regulations in H-1B and J-1 visas for foreign workers, including from India, that prevent doctors from providing medical care at locations other than those specifically approved for their immigration status, are standing in the way of strongest possible medical response to the COVID-19, a bipartisan group of 40 influential US lawmakers has said.

Explaining that medical professionals holding H-1B and J-1 visas are not permitted to provide medical care outside of specifically approved locations, the legislators in a letter to Ken Cuccinelli, Acting Director of the US Citizenship and Immigration Services (USCIS), called for waiving those restrictions during this public health emergency to increase the number of physicians available to respond to the pandemic.

The current public health crisis requires a robust and timely medical response that begins with getting physicians to the front lines. Health care workers on H-1B and J-1 visas, including physicians in the Conrad State 30 program, which helps retain US-trained physicians who work in underserved areas, are a key resource in this process, the lawmakers wrote in a letter to USCIS Acting Director Ken Cuccinelli on Wednesday.

Though, H-1B visa is generally popular among foreign IT professionals, quite a number of them, many a time which are not bound by the Congressional mandated limit of 65,000 visas per year, are also issued to doctors from foreign countries, including India.

Since the H-1B visa is tied with the specific speciality for which they are issued, a doctor with this visa cannot be roped in for any other public health program or temporarily transferred or posted to other place.

As such at a time of public health emergency like the ongoing coronavirus pandemic, health officials are not able to use the services of these foreign doctors.

On the other hand, many doctors from other countries training in the US are required to return to their home country for two years after their training has ended before they can apply for another visa or green card.

Passed by the Congress, the Conrad 30 program allows doctors to stay in the US without having to return home if they agree to practice in an underserved, often rural, area for three years. A large number of Indian doctors are beneficiary of this program.

The 30 refers to the number of doctors per state that can participate in the program.

State and local governments as well as health care providers have found that the site-specificity for work authorization has prevented physicians holding an H-1B or J-1 status from transferring to hospitals and facilities that are overwhelmed with COVID-19 patients or are experiencing staff shortages due to quarantine requirements," said the letter signed by 27 members of the House of Representatives and Senators.

Hospitals and health care providers across the country have been battling the pandemic around the clock for over a month, and many of them, particularly those in rural regions, rely on this visa program to fill critical vacancies at their facilities, the letter said.

"While we have seen an unprecedented number of regulatory waivers to eliminate barriers to our ability to respond to this disease, the continued enforcement of practice site restrictions for physicians with J-1 or H-1B visas unnecessarily limits a pool of ready and willing Iowa physicians to further aid in testing and treating COVID-19, said Iowa Medical Society President MaryGrace Elson, in a statement.

The lawmakers urged USCIS to grant health care providers relief as soon as possible so that the nation's critical resources can be effectively deployed.

USCIS should immediately waive the requirements of the 2015 Simeo guidance for health care providers seeking changes in previously approved employment or new concurrent employment during the current public health emergency, the letter said.

Such a decision would give our nation's health care providers the flexibility that is needed to mount an adequate response during this emergency. Doctors need to be able to act now to use their knowledge and training to save lives without fear of the loss of their immigration status," the lawmakers wrote.

The letter said that H-1B visas are available to workers in specialty occupations, which includes licensed physicians. Hospitals and health care providers across the nation, and particularly those in rural regions, rely on this visa program to fill critical vacancies at their facilities.

As part of the visa approval process, providers must submit to USCIS Form I-129, which requires employers to identify where and for how long the visa holder will work for the duration of their status.

Any changes require a new I-129 per guidance issued by USCIS in 2015. Similarly, physician residents and fellows on J-1 visas are assigned to a specific employer, location, and specialty, and changes are practically impossible during an approved program year, the letter said.

While these policies are well intended, the current public health crisis requires a robust and timely medical response that begins with getting physicians to the front lines, Congressmen wrote to the USCIS acting director.

According to the Johns Hopkins University data, there are over 638,000 COVID-19 cases and nearly 31,000 deaths due to the virus in the US.