Getting the basics right

An online petition in the wake of Bengaluru incident wants the government to ensure basic facilities before attempting to change mindsets. 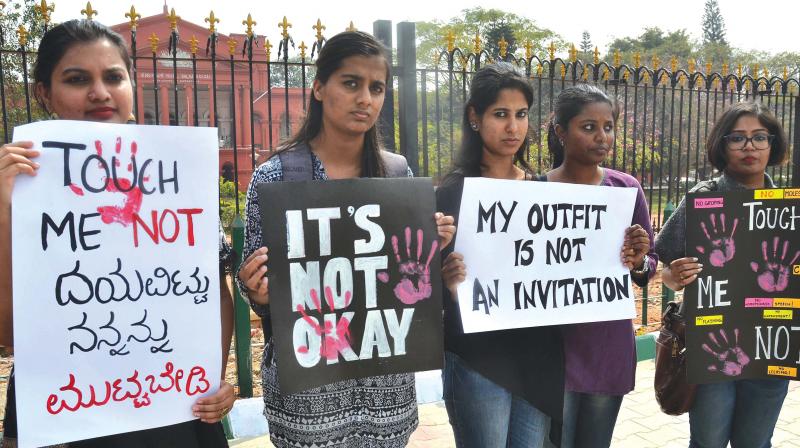 A protest in Bengaluru

The city that’s everyone’s favourite is back in the news. For the wrong reason, though. The brazen mass molestation of women on Brigade Road in Bengaluru on New Year’s Eve has brought to the fore the ugly underbelly of the city. After the incident, an online petition is now doing the rounds. Termed Double #WomensSafety by Effective 100 Helpline, Better Transportation & Street Lights (http://bit.ly/2hOKirP),  it stresses on the need to implement basics before attempting any other drastic changes in the society’s collective behaviour.

Priya Chetty-Rajagopal, an executive director for a Japanese company who has been involved in social and civic issues in the city, started the petition a few days ago. “I’ve tweeted a couple of times and it’s on Facebook as well and is going viral. Currently over 700 people have signed the petition  but that isn’t the point,” she says. “The fear is that it shouldn’t get diluted and sidetracked. If mindset of the authorities is that there’s something wrong with the way women are dressing, then this will continue to happen. There has to be zero tolerance. No means no. No one can take away that right. I know there will be a smoke screen soon. Rather than make a big deal of 'protecting' women, thereby making them feel further victimised, women would be hugely safer if the 100 Police #Helpline was functional and effective; if #StreetLights were bright and operational and if adequate, frequent and safe #transportation was available. This is our right. And what happened to the mandatory #SOS button on #mobile phones?”

Of course change of mindsets and treating women differently is also important, but the need of the hour according to the hundreds of women who have signed this petition is the implementation of basic facilities. The fear that some of them have is that with the buzz around, we might lose sight of these vital issues.

Saritha Hegde, a working professional with Li & Fung says, “We’re being reactionary because we’re angry, just like we were when Nirbhaya was raped. Any kind of cultural change requires long and sustained action that involves both the men and women of our society. We need to plan and implement immediately.”

Designer Susan Fernandes echoes this view. “We want the authorities to deliver on the basics. The mindsets will take a long time to change. The authorities have to act now and we have a right to demand our rights,” she says.