Here is a complete guide from an expert medical practitioner to combat breathing difficulties in children. 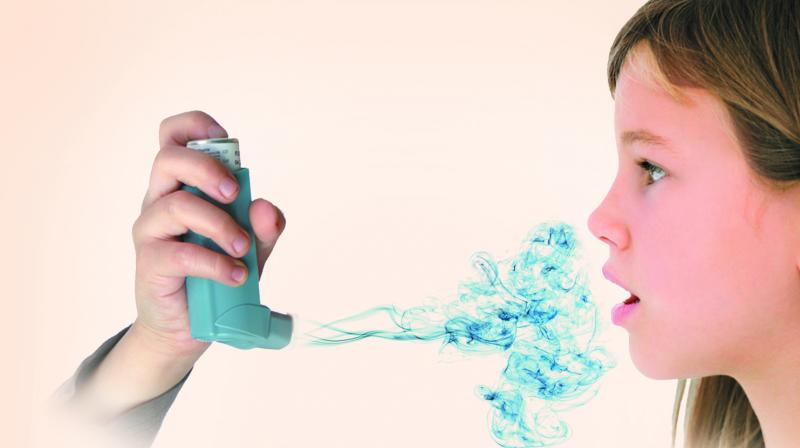 Children are susceptible to the effects of air pollution because their lungs and immune systems are still developing.

With temperatures dipping, concerns about children suffering from asthma, grappling to deal with the cold as well as the increasing levels of smog in cities, are on the increase. The rising vehicular pollution allows the small particulate matter to be in the air and it affects children’s lungs, explains Dr Spurthi Reddy Chitta, senior paediatrician, Rainbow Hospitals, as she stresses on the need for preventive methods of care.

With the pollution levels rising in the city, how are children affected due to the mixing of the vehicular pollution and the lowered temperatures due to winter?
The outdoor environment is complex due to the interaction between pollutants, both natural and manmade, and the weather. Children are susceptible to the effects of air pollution because their lungs and immune systems are still developing. Also, they are more active in environments with high levels of air pollutants, and they receive higher doses of air pollutants compared to adults because of differences in breathing rates and patterns. A growing number of studies show that children living in environments near traffic have increased risks of asthma symptoms, asthma exacerbations, school absenteeism, and asthma-related hospitalisations as well as new-onset asthma. Cold air is a known trigger for asthma, which causes constriction of the lower airways. Smog acts as an irritant that often triggers and exacerbates asthma attacks among children. This combination is detrimental to the health of these children.

What care must those who are already suffering from asthma take? What are the set of precautions that they must follow?
1) Viral infections of the respiratory system are more common in winters. Asthmatics already have sensitive airways and viral infections often trigger and exacerbate the asthma attacks. Avoiding overcrowded places, washing hands frequently, especially before eating, help minimise viral infections.
2) Damp woollen blankets and quilts often have fungal spores in them that aggravate asthma — these clothes must be washed and dried under the sun before using them.
3) Cold air is a trigger for some children with asthma. Before stepping out, one should be well covered, especially the face and nose area. Exercise indoors when it is particularly cold and windy. Always be prepared with the inhalers, and if exercise is a known trigger for asthma in your child, then use them regularly before exercise.

Some children have severe cold and breathing problems because of the increasing pollution levels — what kind of food must be given to them to build immunity? Which are the things that children must avoid?
A healthy, balanced diet is recommended for all children with asthma. Some clinical trials suggest that specific antioxidants in diet might improve asthma control or lung function in asthmatic children. Antioxidant rich Indian foods include green leafy vegetables (like spinach, lettuce), cauliflower, sweet potatoes, carrots, onion, garlic, ginger, black beans, red beans, soya beans and lentils. Fruits such as grapes and apples, nuts and seeds, are all good sources of antioxidants. Dairy foods have often been suggested as a common trigger for asthma, but there is little scientific evidence to support this. It is a myth that dairy foods, particularly milk, causes mucus production. Contrary to this, drinking milk is associated with a lower risk of asthma and studies suggest that children who ate dairy foods everyday had significantly fewer asthma symptoms than those who did not eat dairy foods daily. These foods are important source of bone building in children.

Avoid preserved foods (like pickles, dried fruits) which might contain sulphites: Sulphites are a type of preservative which may worsen asthma.

Avoid processed food: Some children may be sensitive to artificial flavourings or colourings in processed and fast foods. Often, processed foods contain empty calories, leading to obesity in children. Children who are obese are more likely to have asthma.

Children suffer from sudden attacks of asthma or breathing problems in school. What first aid guide should they follow? Is there a drill that is followed in schools by the government as the weather and increasing levels of pollution is becoming a cause of concern?
Use language appropriate for your child’s age to describe what happens when asthma flares-up.

Children with exercise-induced bronchoconstriction may complain about participating in physical activities. However, it is very important for children to stay active, so work with the school staff to develop strategies to keep your child symptom-free while exercising. These may include:

Using a short-acting inhaler 15 minutes prior to exercise.
Drinking plenty of water before, during and after exercise.
Choosing sports that are less likely to trigger symptoms.

For the young ones, talk to teachers, coaches, babysitters and the parents of friends so they can recognise asthma symptoms and know how to respond. Give caregivers a copy of your child’s Asthma Action Plan for reference in case of an emergency. Make sure your child understands the importance of medications and always has his or her rescue inhaler at hand. Explain the right times and the right way to use the rescue medication.
For adolescents and teens, reminders about carrying a rescue inhaler is important.