Soccer headers are repetitive subconcussive head impacts that may be associated with problems with thinking and memory skills. 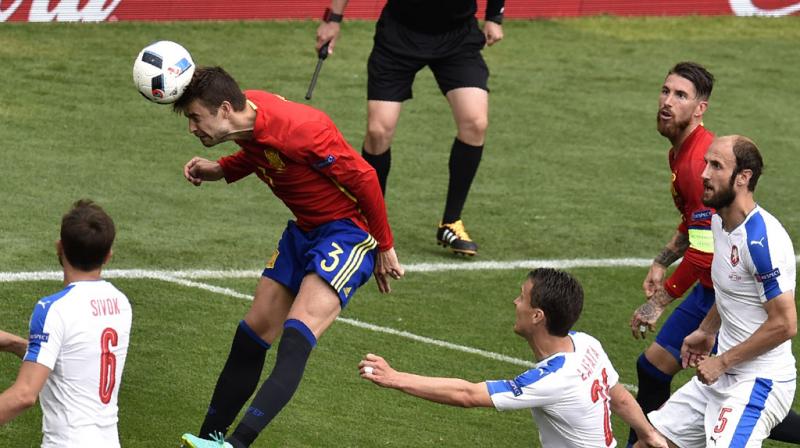 Soccer players must have good balance to play the game well, yet research suggests that headers may be undermining balance. (Photo: AFP)

Soccer players who head the ball often are more likely to have balance problems than those who do not head the ball as often, according to a study.

"Soccer headers are repetitive subconcussive head impacts that may be associated with problems with thinking and memory skills and structural changes in the white matter of the brain," said John Jeka from the University of Delaware in the US.

"But the effect of headers on balance control has not been studied," Jeka said.

For the study, 20 soccer players recruited from the community in Newark in the US took a balance test where they walked along a foam walkway with their eyes closed under two conditions: with galvanic vestibular stimulation (GVS) and without GVS.

For GVS, electrodes placed behind each ear stimulate the nerves that send messages from the balance system in the inner ear to the brain.

The stimulator can make you feel like you are moving when you are not. In this case, it made participants feel like they were falling sideways, researchers said.

The soccer players, who had an average age of 22, also completed questionnaires about how many times they had headed the ball during the past year.

The number of headers over a year for each participant ranged from 16 to 2,100, with an average of 451 headers.

The study found that the players with the largest number of headers had the largest balance responses to GVS in both foot placement and hip adduction during the walking test, which indicated that they had vestibular processing and balance recovery problems.

"Soccer players must have good balance to play the game well, yet our research suggests that headers may be undermining balance, which is key to all movement, and yet another problem now linked to headers," said Fernando V Santos from the University of Delaware.

"It is important that additional research be done to look more closely at this possible link with balance and to confirm our findings in larger groups of people," Santos said.