Amputees may be able to play drums, piano with Star Wars like bionic hand

The first amputee to use this technology is Jason Barnes, a musician who lost part of his right arm five years ago. 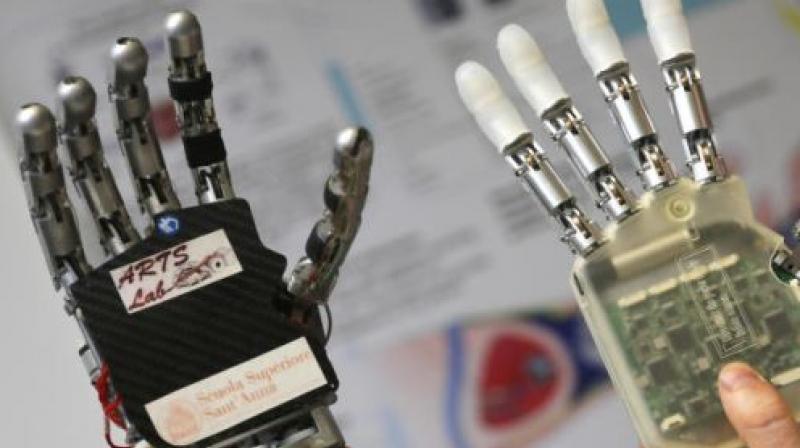 The device is inspired by the bionic hand given to Luke Skywalker in Star Wars series (Photo: AFP)

Washington: Scientists have created an ultrasonic sensor that allows amputees to control each of their prosthetic fingers individually, paving the way for a Star Wars-like bionic hand.

The sensor provides fine motor hand gestures that are not possible with current commercially available devices.

The first amputee to use this technology is Jason Barnes, a musician who lost part of his right arm five years ago.

Barnes is now able to play piano and drums for the first time since his accident.

The device is inspired by the bionic hand given to Luke Skywalker in Star Wars series, the researchers said.

"Our prosthetic arm is powered by ultrasound signals," said Gil Weinberg, from the Georgia Tech College in the US.

"By using this new technology, the arm can detect which fingers an amputee wants to move, even if they dont have fingers," Weinberg said.

Barnes no longer has his hand and most of his forearm but does have the muscles in his residual limb that control his fingers.

Earlier, Barnes was using prosthesis attached to his muscles and controlled by electromyogram (EMG) sensors.

"EMG sensors are not very accurate. They can detect a muscle movement, but the signal is too noisy to infer which finger the person wants to move," Weinberg said.

"We tried to improve the pattern detection from EMG for Barnes but could not get finger-by-finger control," he said.

The researchers have now attached an ultrasound probe to the arm. The same kind of probe doctors use to see babies in the womb could watch how Barnes' muscles moved.

"If this type of arm can work on music, something as subtle and expressive as playing the piano, this technology can also be used for many other types of fine motor activities such as bathing, grooming and feeding," said Weinberg.

"I also envision able-bodied persons being able to remotely control robotic arms and hands by simply moving their fingers," he said.