Life   Health  12 Mar 2017  Strawberries may not be safe for consumption: WHO
Life, Health

Strawberries may not be safe for consumption: WHO

Strawberries remain at the top of the list of produce with the highest concentration of pesticides. 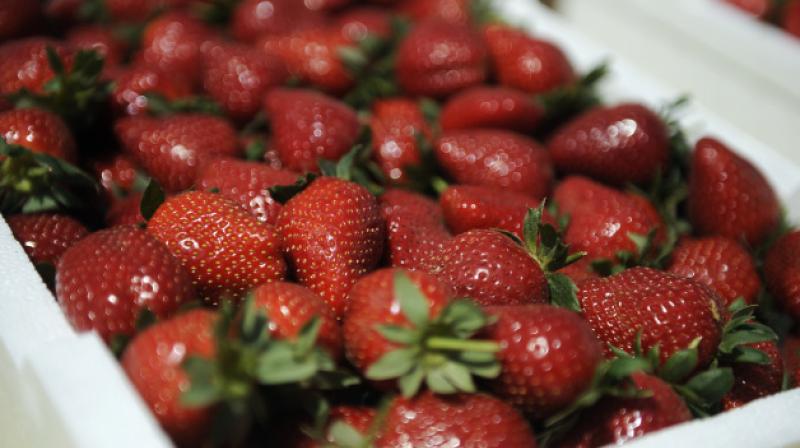 Strawberries remained at the top of the list with at least 20 pesticides (Photo: AFP)

New York: Strawberries are easily one of the most popular fruits across the globe and its flavor gives chocolate a tough competition in the dessert spectrum making it a world-wide favorite, however, a recent report has found that the red fruit tops in the list of produce heavily contaminated with pesticide residues.

According to the World Health Organization, pesticides are potentially toxic to humans and may have negative effects on reproduction, immune or nervous systems, cause cancer and lead to other problems.

An annual report by the Environmental Working Group found that nearly 70% of samples of 48 types of conventionally grown produce were contaminated with pesticide residues, reports CNN.

The EWG Shopper's Guide to Pesticides in Produce, ranks pesticide contamination of popular fruits and vegetables based on more than 36,000 samples of produce tested by the US Department of Agriculture and the Food and Drug Administration.

This year, strawberries remained at the top of the list of produce with the highest concentration of pesticides, while sweet corn and avocados were ranked as having the lowest concentration.

Produce that tested positive for various pesticides and contained higher concentrations of pesticides than other produce is featured on the list, known as the "Dirty Dozen."

Strawberries remained at the top of the list with at least 20 pesticides, while spinach jumped into the second spot with twice as much pesticide residue by weight than any other crop.

Americans eat nearly 8 pounds of fresh strawberries per person each year, and even when they are rinsed in the field and washed before eating, they are still most likely to be contaminated with pesticide residue, according to the Environmental Working Group.