The high Arsenic levels are interestingly found to be confined to flood plains of River Ravi. 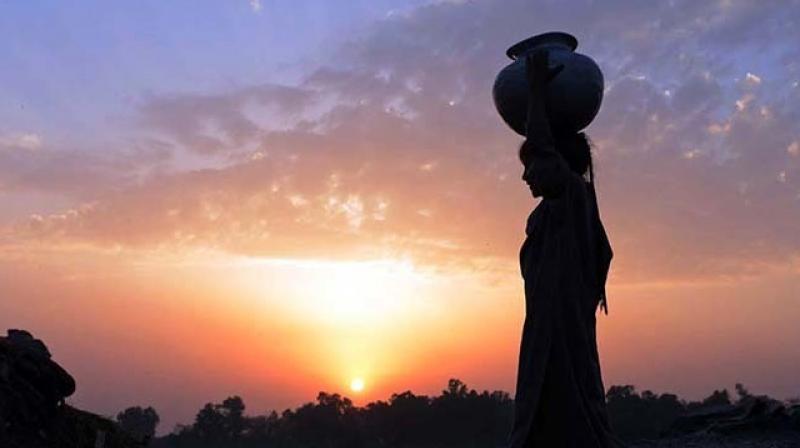 It has also been associated with impaired intellectual and motor function in children (Photo: AFP)

New Delhi: The Indus Basin region covering areas of Indian as well as Pakistan side of Punjab has "serious" levels of arsenic in groundwater, along with traces of fluoride and nitrate, raising a major public-health concern, a new study Tuesday said.

Of the 13,000 wells in Indian side of Punjab, 25 per cent of them had high levels of arsenic, the study highlighted.

Conducted by TERI School of Advanced Studies (TERI SAS) in New Delhi in collaboration with Quaid-i-Azam University, Islamabad and Columbia University of New York, the study said approximately 30,000 hand pumps were tested on both the sides of the border.

"The arsenic levels were recorded almost 20 to 50 times higher than the World Health Organization (WHO) limits of 10 parts per billion," said the study funded by National Science Foundation, USA and United States Agency for International Development (USAID) in both the countries separately.

"The high Arsenic levels are interestingly found to be confined to flood plains of River Ravi covering districts of Tarn Taran, Amristsar, Gurdaspur," it added.

According to the findings, the high levels were leading to slow poisoning of the body, potentially causing skin lesions, damage to the nervous system, stomach ailments, diabetes, renal (kidney) toxicity, cardiovascular disease and cancer.

Further, because of high fluoride content in water, children were facing severe dental and skeletal fluorosis at an early age, and the high nitrate levels were causing methemoglobinemia, gastric cancer, goitre, birth malformations, hypertension, and a drop-in blood pressure, the study noted.

Elaborating on the adverse impact of the three contaminants, the study said chronic exposure to arsenic by drinking groundwater was causing infant mortality as well as adult mortality due to cardiovascular disease and cancers of the lung, liver, and bladder.

It has also been associated with impaired intellectual and motor function in children, it added.

"Deficiency of fluoride in the diet causes dental caries and osteoporosis but chronic excess intake, caused by drinking groundwater with fluoride above the WHO guideline of 1.5 mg/L, can cause severe dental and skeletal fluorosis," it said.

"Of India’s 32 states, 14 have been identified as 'endemic' areas for fluorosis, with an estimated 25 million people impacted, and another 62 million 'at risk'. Fluorosis at more severe stage causes bilateral lameness and stiffness of gait," it added.

"High concentrations of arsenic do not impact environment, however, it has been found to find its way into the food chain by irrigating crops with high arsenic groundwater," the study said further.

"The most prominent being is its accumulation in rice grains. However, the ingestion of Arsenic, nitrate and fluoride through direct intake of groundwater is found to be of primary concern," it added.

The study suggested both India and Pakistan to immediately conduct a blanket field testing of all the hand pumps in the villages.

"If blanket testing is done people would be aware of safe and unsafe wells, thus immediate intervention would be to switch wells," it said.

"If the community agrees, all the safe wells could be centralised for water supply within the village, this would have minimal cost compared to centralised treatment technologies such as community RO systems which are maintained by the Drinking Water Supply and Sanitation of the Punjab government," it said.

The long-term solutions would include installation of remediation/treatment technologies and new deep wells in the worst affected areas, the study added.