Parents have mild depression when they’re with kids having eczema 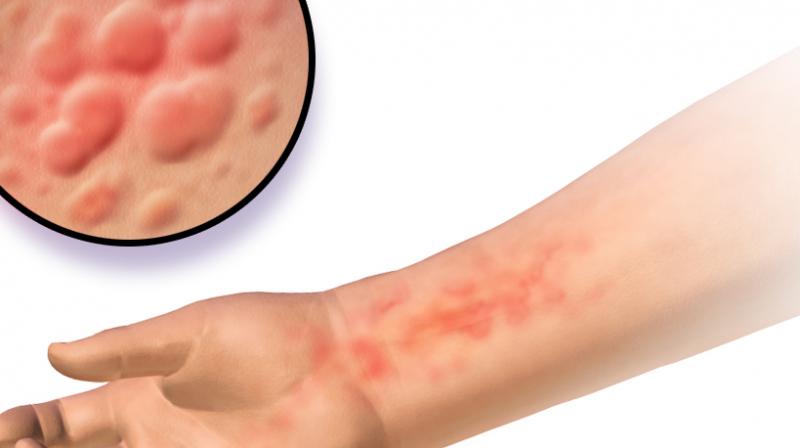 Eczema is a skin condtion characterised by inflammation and itching. (Photo; ANI)

Washington: Mild anxiety and depression have been found in parents or caregivers surrounding children with atopic dermatitis, the most common form of eczema. In the study presented at the 28th EADV Congress, researchers assessed the impact of an atopic dermatitis diagnosis on the families of 35 children aged 1-6.

They evaluated 83 family members and caregivers and found that all respondents reported at least mild severity anxiety with some showing moderate severity anxiety. Almost three in four (74 per cent) participants were also found to present with depression.

Atopic dermatitis, the most common form of eczema causes the skin to become itchy, red dry and cracked. It is a chronic condition that most often occurs in people who have allergies and can develop alongside asthma and hay fever. As well as the symptoms of AD, patients with the condition are also known to suffer insomnia, anxiety and psychosocial stress, linked to the physical manifestation of their eczema.

The study utilised the Hamilton Depression Rating Scale (HDRS) and Hamilton Anxiety Rating scale (HAM-A), one of the first and most widely used ratings systems for identifying the two conditions in both a clinical and research setting.

To supplement the ratings questionnaires, the team also asked participants what their greatest concerns were. The most frequent worry reported was the information families and caregivers receive about the nature of the disease itself, since AD is a long-term condition which requires complex and costly medical treatments.

Lead researcher Dr Vesna Grivcheva-Panovska opined, "The chronicity and complexity of chronic dermatitis often leads to overlooked anxiety and depression in family members and caregivers, but our results show the extent of this cannot be overstated."