According to Lahore Chamber of Commerce and Industry, factories in and around city dump untreated waste in open pits or water in streams. 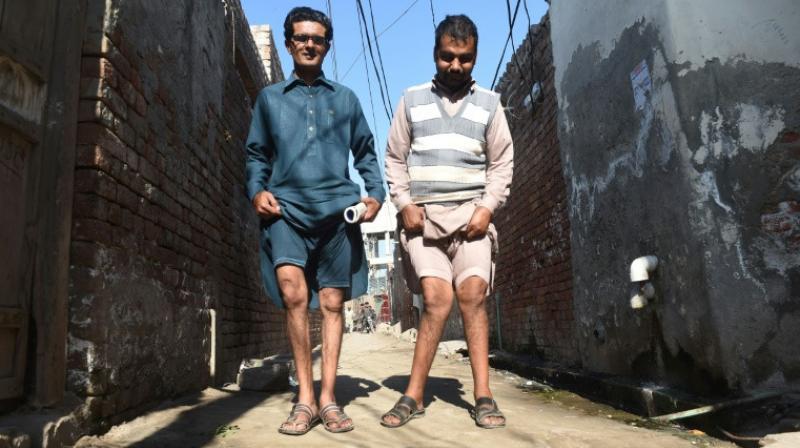 Basharat Ali was 15 when his legs began to falter, a condition doctors have blamed on polluted water in a Pakistani region infamous for the deformities that afflict many of its people.

Too weak to carry his own schoolbag, he was taken to hospital, where doctors said water laden with toxic levels of arsenic, fluoride, minerals and various metals was to blame.

"It was a big blow to me as I had to quit my studies to get treatment," Ali told AFP on the rooftop of his house some 45 kilometres (28 miles) from Lahore, the capital of Pakistan's largest province Punjab.

From there Ali's view takes in some of the plastic, chemical, pharmaceutical and wire manufacturing factories nearby. They are widely blamed for contaminating the water local residents have to drink.

According to the Lahore Chamber of Commerce and Industry, 90 per cent of factories in and around the city dump their waste untreated in open pits or discharge untreated water in streams.

Local media first reported on the problems in Ali's village well over a decade ago, prompting teams from Lahore's government hospital and water officials to make several visits.

New wells have been dug since, but they only provide more water polluted with arsenic.

Meanwhile Ali and other residents of the area have paid a heavy price, with activists saying 200 other children have suffered bone and dental deformities since 2000.

"Now these children are grown men and women, but they remain hidden in their houses. They are not getting any marriage proposals because people say that their bones are deformed," he says.

Ali, now 32, remains frail, his teeth yellowed and decaying. His is permanently disabled, with one leg shorter than the other, and has difficulty walking.

His village Kot Assadullah and neighbouring Kalalanwala, to which it is joined, now have a reputation.

"People from other villages can recognise us and say 'You are from Kalalanwala'," said 26-year old Muhammad Mukhtiar, who tends a shop in the village.

When AFP visited recently men, women and children carrying cans and bottles were queueing at a new solar-powered water filtration plant paid for by a charity.

A government-funded filtered water plant is also currently under construction, but residents say neither will be enough.

Chemicals and toxins including arsenic have been found in the village's drinking water and are causing the deformities, said Dr Khalid Jamil Akhtar, a private clinician who has been visiting the area for the provincial government.

Arsenic, he said, can cause vomiting, diarrhoea and stomach problems, while also affecting the liver, lungs, kidneys and eventually the entire gastrointestinal tract.

Polluted water could also result in neuropathy -- a nerve dysfunction that can lead to deformity-causing numbness or weakness in the limbs.

Dr Akhtar said most of the patients he saw were suffering from neuropathy, primarily caused by "contaminated water, by the toxins of the factories in the area" -- though he added that some cases could be caused by genetics, without giving a breakdown.

Arsenic -- typically found in groundwater contaminated by untreated industrial, municipal and agricultural waste -- in particular is a source of increased concern.

A study conducted by Swiss expert Joel Podgorski using 1,200 groundwater samples throughout Pakistan said that up to 60 million people were at risk of arsenic poisoning.

The study, published last year, identified high concentrations of arsenic along the Indus River and its tributaries, with "hot spots" around the populated areas of Lahore and the southern city of Hyderabad.

The Pakistan Council of Research in Water (PCRWR) disputes the findings, arguing that the sample size was too small, but agrees there is an arsenic problem.

"We have done tests on up to 60,000 samples from Lahore to lower Sindh under a study being carried out since 1999 and have found arsenic at many places," said Lubna Bukhari, head of water quality for the PCRWR.

It also says that water monitoring projects carried out since 2012 show that between 69 and 85 percent of Pakistan's total water is contaminated or otherwise unfit for human consumption.

"We even found arsenic in bottled water," said Bukhari.

The problem is given extra urgency by Pakistan's looming water scarcity crisis, with the country on track to become the most water-stressed country in the region by 2040, according to the UN.

But there is no national strategy for cleaning up what water there is and much less for conserving it, with environmental matters left in the hands of provincial authorities.

There, a 25-year-old labourer named Naveed said his legs became deformed when he was three years old.

"I don't have any hope as we are poor and nobody listens to us," Naveed said.