New Year resolutions are infamous for being abandoned, though they’re made with all good intentions.Is there a way to reach our 2021 goals? 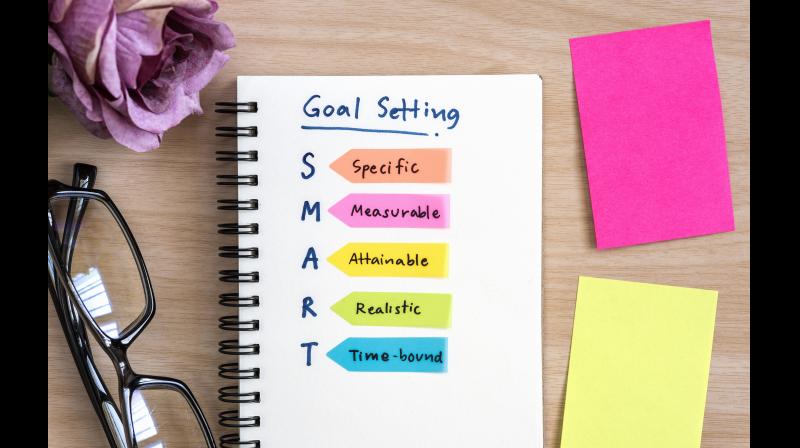 Instead of formulating a vague goal such as “I want to be fit in 2021,” be SMART about it. Say “I will jog for 10 minutes, three times a week for three months.”

Every year, as New Year approaches, the Internet is choked with memes on resolutions that end up in colossal failures. While most of these memes tickle our sense of humour, there’s also some misgiving about future failures. The key to success, mental health experts tell us, is to understand why we failed in the first place, so that we can avoid a repetition of the same scenario.

Get Real
According to Dr Diana Monteiro, counselling psychologist at the Hyderabad Academy of Psychology, one of the biggest reasons for failure is that we set up unrealistic goals while making resolutions. “Most people aim for drastic transformation in a number of areas. And that is exactly why they fail. Humans have a limited amount of willpower. In the New Year season, we divide this limited willpower among several goals,” she explains.
This situation necessitates a lot of conscious effort being spent on each goal, which is unsustainable and leaves us exhausted. “Most people aim for perfection and when they fail to accomplish that even once, they give up altogether,” says Dr Monteiro.

Follow through
Neuro-psychiatrist Dr Samhita Sharma, director, Manasa Nursing Home, Hyderabad, agrees with this reasoning. Another equally common cause for failure is the urge to give up on not seeing the expected drastic results right from the beginning, she says.
“Initially everyone works hard to achieve their goals; but when the signs of progress don’t match expectations, they’re discouraged and give up,” she says. “A common pattern is for people to spend long hours making plans and thinking, but then, failing to spend even five minutes of following through. That’s usually because they are scared of failure, have failed before, or are scared of not making enough progress despite efforts,” she feels.

Keep going!
“It’s natural for humans to fail, and everyone fails in their resolution at least once,” Dr Monteiro points out. “Even so, every setback can also be a means of going forward. For example, when embarking on a journey of eating healthily, if, after a few days of following a healthy diet, you drink a cola, it doesn’t mean you’ve failed. Get back to healthy food habits after the ‘setback’; you’ll go forward.”

In other words,  the psychologist explains, it’s all about how we react to setbacks. “Remember that failing is a part of the journey towards success, and setbacks don’t mean you’ll automatically switch back to old behaviours. Accepting setbacks and trying again might make you a Virat Kohli, but those simply giving up will never be heard of,” Dr Monteiro stresses.

Break the cycle
According to Dr Sharma, most of us continue destructive habits despite being aware of their consequences, including fatal ones.
“The human brain creates a substance called dopamine when it expects rewards. So anything that causes pleasure, even temporarily – including eating foods we love or getting compliments on social media – causes the secretion of this ‘feel-good hormone’,” explains the neuro-psychiatrist. “Dopamine secretion stops as soon as we stop doing that particular activity, prompting us to do it again. After a point, however, some of these activities can turn destructive, sometimes at the cost of our health and wealth.”
However, Dr Sharma also says this vicious cycle can be stopped. “Ideally, people in such situations should visit a psychiatrist. Another way is to stay otherwise busy through the day, so you have no time to indulge in the addictive activity,” she suggests.

One change at a time
Dr Monteiro feels sticking to resolutions might depend on one’s need for change. “Usually, when someone goes through hard times, he/she is motivated to make changes to end the hardship. On the other hand, if everything is going well in a person’s life, he/she will not be motivated to change. At the heart of motivation is desire – a desperate need for change, which cannot be accomplished without setting goals. Therefore, while making resolutions, one must understand why those goals are important, and then work to strengthen the desire for them, instead of just starting off in the hope that things will work out,” she explains.
Dr Monteiro emphasises that resolutions will work only when we make small changes, one by one. “Entirely changing a system at once threatens stability. Instead, add changes one by one,” suggests the psychologist. “Adjusting to the change makes a habit, which can then be carried forward almost naturally, without much effort. Also, it’s imperative that we set realistic goals and applaud every little change achieved instead of aiming for unrealistic goals in the name of perfection,” she adds.

Be SMART
Dr Sharma explains how a SMART goal can lead to success. Here’s what SMART stands for:
S: Specific
M: Measurable
A: Attainable
R: Relevant
T: Time oriented
So, instead of formulating a vague goal such as “I want to be fit in 2021,” be SMART about it. Say “I will jog for 10 minutes, three times a week for three months.”