AAA Foundation’s report found that the less sleep drivers got, the more their probability of a crash climbed. 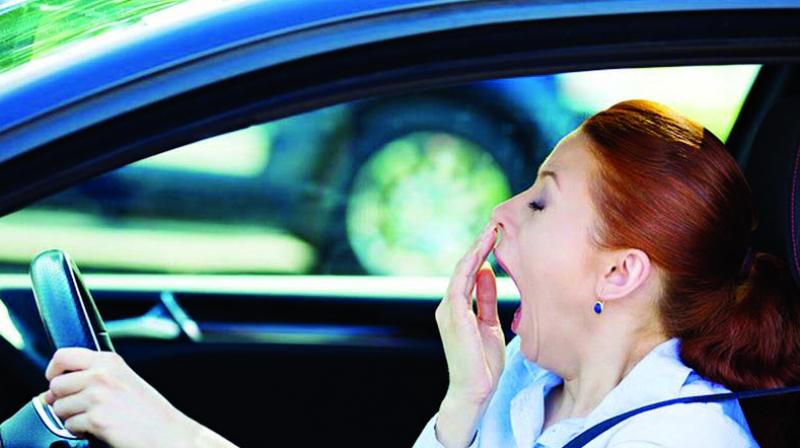 If you regularly drive to work, make sure your night’s sleep is complete.

Hazards of drinking and driving, we all know only too well. But sleep deprived driving can be dangerous too! Did you know car crashes rank among the leading causes of death in the United States? Distracted driving can prove fatal. A new report compiled by the AAA Foundation for Traffic Safety, USA, points out that motorists, who miss just one to two hours of the required seven or more hours of sleep, nearly double their odds of a crash.

The report was based on data provided by the National Highway Traffic Safety Administration, and mined from police-reported crashes that involved a tow vehicle and/or an emergency medical response. Drivers involved in these incidents were asked how much sleep they had in the last 24 hours.

Not surprisingly, the AAA Foundation’s report found that the less sleep drivers got, the more their probability of a crash climbed: Those with only five to six hours of sleep under their belt were nearly twice as likely to crash, but drivers with only four or five hours of sleep risked four times the crash rate.

Sleep deprivation has several negatives: In addition to making us moody, it diminishes our productivity at work, it hurts our memory; weakens our immune system; and may increase our risk for obesity, cancer, and Alzheimer’s disease. Perhaps most dangerously, though, it causes cognitive impairment: One study found that subjects who hadn’t slept for 17 to 19 hours performed equivalent or worse on tests than if they had a blood-alcohol level of .05.

“You cannot miss sleep and still expect to be able to safely function behind the wheel,” Dr David Yang, the AAA Foundation for Traffic Safety’s executive director, said in a news release.

Unfortunately, a good portion of drivers on the road are likely to be sleep-deprived: 35 per cent of American adults sleep less than seven hours daily, according to a recent study conducted by the U.S. Centres for Disease Control and Prevention. Meanwhile, nearly one in three drivers admitted to the AAA Foundation that they “drove when they were so tired that they had a hard time keeping their eyes open” in the past month.

So, before you get into the car, pay less attention to how you feel physically, and instead think whether you got your seven or more hours. If you didn’t, consider taking public transit, contacting a cab or ride-sharing service, or taking a nap before you drive. As for longer road trips, avoid driving later at night, take regular breaks (every 100 miles or so), and have a companion in the passenger seat that will keep you awake and take over driving duties when you feeltired.