Chinese people have longevity but not finess

At the same time, however, physical and cognitive function showed a small but significant deterioration. 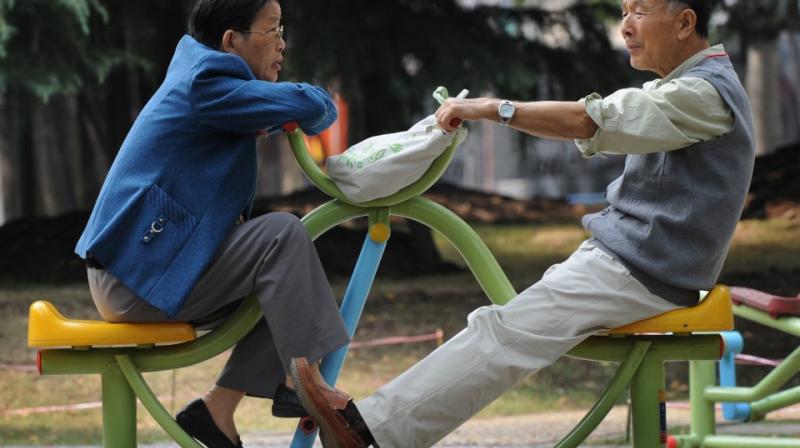 The 'over 80' cohort is by far the fastest rising age group in the country (Photo: AFP)

Beijing: The number and proportion of people in China over 80 is growing, but their mental and physical fitness appear to be declining, scientists reported Friday.

Comparing medical data and surveys from 1998 and 2008 of nearly 20,000 people aged 80 to 105, researchers found that the ranks of China's 'oldest old' had expanded since the turn of the century.

For octogenarians and nonagenarians, mortality fell by nearly one percent over that decade, they reported in the medical journal The Lancet.

For the 100-and-up club, death rates dropped nearly three percent. The 'over 80' cohort is by far the fastest rising age group in the country.

At the same time, however, physical and cognitive function showed a small but significant deterioration.
Simple tasks -- standing up from a chair, for example, or picking up a book off the floor -- were harder to perform, while scores on memory tests slumped.

"This has clear policy implications for health systems and social care, not only in China but also globally," the authors concluded.

"Many more state-subsidised public and private programmes and enterprises are urgently needed to provide services to meet the needs of the rapidly growing elderly population," especially those over 80.

Paradoxically, the 2008 respondents reported less difficulty in performing daily activities -- such as eating, dressing and bathing -- than those born a decade earlier.

The scientists, led by Yi Zeng, a professor at the National School of Development at Beijing University, chalked this up to improved amenities and tools, but said more research was needed.

The findings illustrate the tug-of-war between two approaches to assessing ageing populations, whether in rich or developing countries.

One emphasises the "benefits of success": people living longer with lower levels of disability because of healthier lifestyles, better healthcare and higher incomes.

By contrast, the "cost of success" theory suggests that living longer might mean that individuals survive life-threatening illnesses but live with chronic health problems as a result.

The new study shows that both theories are at play, and that governments will need to adapt under either scenario. "The findings provide a clear warning message to societies with ageing populations," Yi said in a statement.

"Although lifespans are increasing, other elements of health are both improving and deteriorating, leading to a variety of health and social needs in the oldest-old population."

Whether it means providing long-term care for the disabled, or work and social opportunities for healthy octogenarians, adjusting to an ageing population will require planning and investment, the researchers concluded.