The team, in the surgery started on Tuesday completed early on Wednesday, divided the bladder into two separate organs. 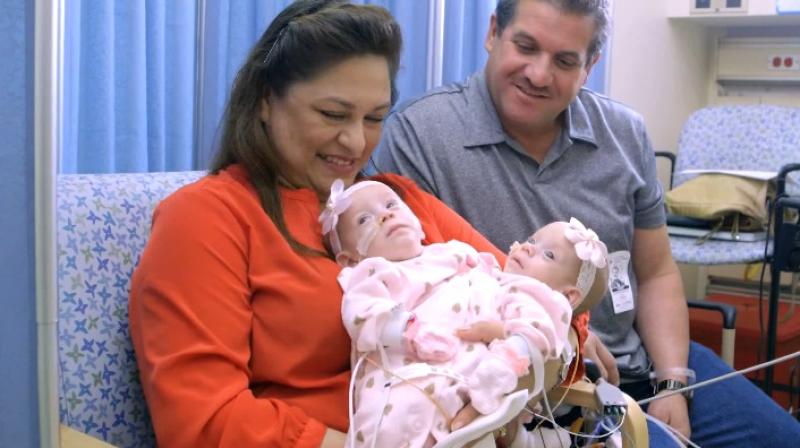 The girls are expected to remain in the intensive care unit at the hospital for two weeks (Photo: YouTube)

Los Angeles: Conjoined 2-year-old twin girls who were separated at a California hospital this week were recovering in stable condition after 17 hours of surgery, officials said on Thursday.

Separation surgery is performed about five times a year in the United States, with doctors successfully handling one last month in Memphis, Tennessee, on twin sisters born in Nigeria.

The operation on Erika and Eva Sandoval, who faced each other, was done at Lucile Packard Children's Hospital, part of the Stanford University health system in Palo Alto, California.

The surgery was challenging because they shared much of their lower body and had one liver, one bladder and three legs, hospital officials said in a statement.

In video provided by the hospital, the surgical team was shown gathered around the twins, forming a circle with their arms around each other before beginning the procedure.

The team, in the surgery started on Tuesday completed early on Wednesday, divided the bladder into two separate organs. It also split the liver to give half to each child, the statement said.

The girls each have one leg, with doctors using the third leg for reconstruction, taking its skin and muscle to close one child's abdominal wall, officials said.

The girls are expected to remain in the intensive care unit at the hospital for two weeks. They are sharing a hospital room in separate beds.

"Seeing them now in the ICU, you look at them and think 'You're missing your other half' but we know that this is the right path for them: to be independent, have the chance to succeed and explore on their own everything the world has to offer," the twins' mother, Aida Sandoval, said in a statement.

Most conjoined twins die in the womb, and about half who are born alive do not make it past a day.