The man says he doesn't know how they got there, hospital authorities recommend psychiatric evaluation. 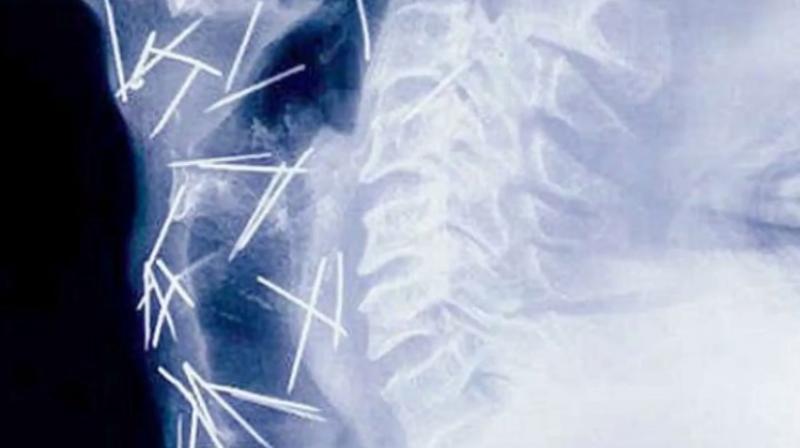 Sometimes people pierce or hurt themselves in depression and don't remember it (Photo: YouTube)

Incidents of people trying to do bizarre things with their body have been reported several times, and this has been known to land them in trouble, even proving fatal in some cases. Not long ago a man was found to be swallowing metal plates and other objects believing yoga helped him do anything.

Now doctors in Kota are baffled to find 150 pins inside 56-year-old Badrilal Meena who says that he has no idea how they got inside his body. The pins are lodged everywhere in his body including arms, feet, neck and even his windpipe and arteries, with one being so rusted that it could’ve been inside for six months.

Meena had to visit six hospitals to get pins removed from his body and doctors say it’s a miracle that he didn’t suffer long term damage. It was also a challenge to remove the pins since they were also lodged in places like his esophagus and the carotid artery through which the brain gets oxygen.

He lost 30 kg in search of a hospital to take up his case and by the time he found help, Meena was fragile and chances of survival seemed bleak for him. Even though Meena and his family members insist he didn’t insert them, hospital authorities recommended psychiatric evaluation saying that people sometimes pierce or hurt them in depression and don’t remember it later.

As of now 91 needles have been removed from Meena’s body as he is recovering well after a complex surgery.