Unlike drugs, virtually all vaccines need to be transported at cold temperatures, usually between 2 and 8 degrees Celsius 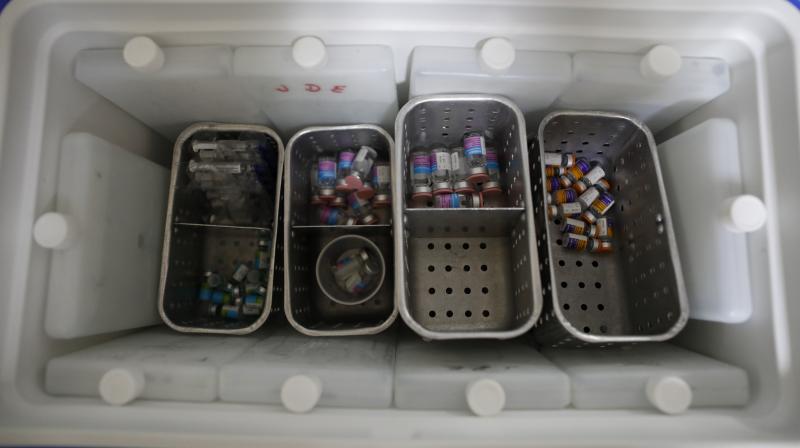 With most frontrunner vaccine candidates likely to require extra cold' storage, the private sector could also be roped in for effective delivery of a preventive when it is available, suggest several experts and industry insiders. (AP)

New Delhi: The safe delivery of vaccines for mass immunisation against COVID-19 is a massive challenge and India will need to significantly ramp up its cold chain facilities, say experts as the world's second most populous nation moves into the next stage of management of the disease and looks towards a preventive.

With most frontrunner vaccine candidates likely to require extra cold' storage, the private sector could also be roped in for effective delivery of a preventive when it is available, suggest several experts and industry insiders.

Some vaccine frontrunners are in advanced stages of trial and could hit the market by early next year, making the task of securing last mile connectivity and ensuring that nothing goes wrong before the shot is administered more urgent.

Union Health Minister Harsh Vardhan said earlier this week that the government expects to receive and utilise 400-500 million vaccine doses for COVID-19, and cover approximately 20-25 crore people by July 2021. The Centre has also reportedly directed states to make a robust plan for vaccine storage and distribution by October 15.

Most if not all the current frontrunners require extremely stringent cold chains, making them immensely challenging for India to implement, said Satyajit Rath from New Delhi's National Institute of Immunology (NII).

The immunologist noted that some COVID-19 vaccines will need storage temperatures that simply cannot be realistically managed in any large-scale Indian campaign.

He said the real problems will arise once vaccines are ready to go into the market.

Vaccine candidates by Moderna and Pfizer will require stringent standards for refrigeration that may hamper how they are distributed to millions of people across India's length and breadth, according to scientists.

Unlike drugs, virtually all vaccines need to be transported at cold temperatures, usually between 2 and 8 degrees Celsius, said Raghavan Varadarajan, professor at the Indian Institute of Science (IISc) in Bengaluru.

The necessity is to keep the vaccine product cold, either refrigerated or frozen. This is a constraint especially with large numbers of doses, Varadarajan told PTI, explaining the particular problems of India that has a population of 1.3 billion, second only to China.

Many vaccines lose potency when exposed to higher temperatures, he said, and re-cooling does not help.

Thus we need what is called the cold chain of handling before use, said Varadarajan whose team at IISc is working on a warm vaccine that can be stored for over a month at 37 degrees Celsius, and needs no cold chain for storage.

Pawanexh Kohli, the founding CEO of India's National Centre for Cold-Chain Development (NCCD), agreed that protocols will require COVID-19 vaccines to be kept between 2 and 8 degrees Celsius, while in transport and storage until delivery.

The Moderna vaccine candidate is shipped in minus 20 degrees Celsius and held at 2-4 degrees for seven days. The Pfizer (vaccine) that requires minus 70 degrees temperatures, Kohli, honorary professor of post-harvest Logistics at the University of Birmingham in the UK, told PTI.

Both the Moderna and Pfizer vaccines use a synthetic version of genetic material from part of the coronavirus.

The genetic material called messenger RNA (mRNA) then prompts the cells to make a tiny piece of the virus, which the immune system recognises as foreign. If the person is later exposed to the real virus, the immune system will attack it.

Noting that RNA vaccines have never been used on humans, Vardarajan said it is possible high temperatures can affect these structures and thus affect the efficacy of the formulation.

While a bulk of the vaccines will be distributed through the Centre's Universal Immunization Programme (UIP) mechanism, experts also suggest that the government rope in private cold chain operators.

Cold chain logistics involves many moving parts, including cold storage  facilities that store products waiting to be transported, cooling systems to keep it at an appropriate temperature during all aspects of the supply chain such as storing and transporting. Gel packs are also often used for medical and pharmaceutical shipments.

Noting that cold storage protocols are well established in India, Kohli said the public health network is limited in capacity.

Luckily, the food cold chain has synergistic use for this purpose and should assist in this battle. Existing cold chain enterprises may need to allocate specific resources in their network, noted Kohli.

He added that the food cold chain has the maximum reach, with extensive last mile connectivity, and will require minor redesign to designate storage space and transport load for this purpose.

Almost every cold chain owner I have spoken to is willing to contribute space and assets towards this, should the need arise,  Kohli added.

Kohli also believes that India must restructure with purpose to start and finish the immunisation programme within a short time period to be effective.

According to the World Heatlh Organisation, at the higher levels of the cold chain, i.e. at primary and regional intermediate stores, the oral polio vaccine must be kept frozen between minus 15 degrees Celsius and  minus 25 degrees Celsius.