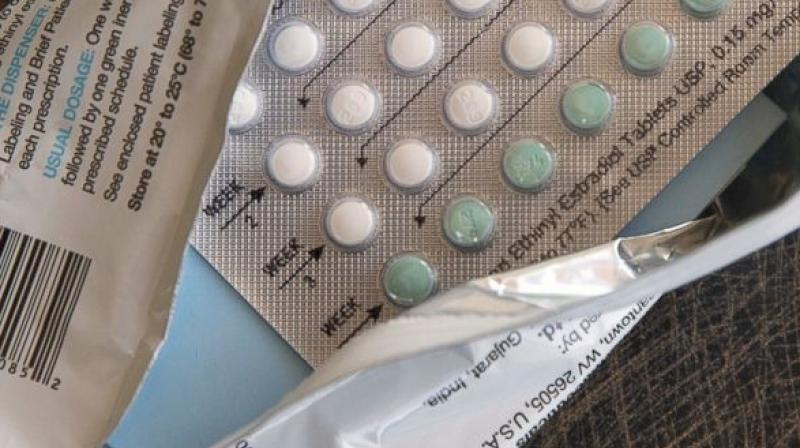 Women in their 40s may want to consider non-hormonal IUDs, getting their tubes tied or talking with their partners about vasectomy. (Photo: AP)

Modern birth control pills that are lower in estrogen have fewer side effects than past oral contraceptives. But a large Danish study suggests that, like older pills, they still modestly raise the risk of breast cancer, especially with long-term use.

Researchers found a similar breast cancer risk with the progestin-only intrauterine device, and they couldn't rule out a risk for other hormonal contraceptives like the patch and the implant.

But the overall increased risk was small, amounting to one extra case of breast cancer among 7,700 women using such contraceptives per year. Experts who reviewed the research say women should balance the news against known benefits of the pill — including lowering the risk of other cancers.

"Hormonal contraception should still be perceived as a safe and effective option for family planning," said Dr. JoAnn Manson, chief of preventive medicine at Harvard's Brigham and Women's Hospital, who was not involved in the research.

Women in their 40s may want to consider non-hormonal IUDs, getting their tubes tied or talking with their partners about vasectomy, Manson said.

Studies of older birth control pills have shown "a net cancer benefit" because of lowered risk of cancer of the colon, uterus and ovaries despite a raised breast cancer risk, said Mia Gaudet, a breast cancer epidemiologist at the American Cancer Society.

There was optimism that newer, low-dose contraceptives would lower the breast cancer risk, but these results have dashed those hopes, said Gaudet, who wasn't involved in the research.

About 140 million women use some type of hormonal contraception, including about 16 million in the United States.

Researchers analyzed health records of 1.8 million women, ages 15 to 49, in Denmark where a national health care system allows linking up large databases of prescription histories, cancer diagnoses and other information.

Results were published Wednesday in the New England Journal of Medicine. Novo Nordisk Foundation funded the research, but played no role in designing the study. The foundation has ties to the Danish pharmaceutical company Novo Nordisk, which primarily makes diabetes drugs and does not make contraceptives.

Digging further, the researchers found no differences among types of birth control pills. Because of fewer users, the results for the patch, vaginal ring, implant and progestin shot were less clear, but the analysis didn't rule out an increased breast cancer risk for those methods.

Researchers accounted for education, childbirth and family history of breast cancer, but they weren't able to adjust for several other known cancer risk factors such as alcohol use and limited physical activity, or protective factors such as breast-feeding.

Women with a family history of breast cancer may want to ask their doctors about other contraceptives, said Dr. Roshni Rao, a breast surgeon at New York-Presbyterian/Columbia University Medical Center.

"Oral contraceptives are like any other medication," Rao said. "There are risks and there are benefits. If you have a reason to be taking them, it's perfectly reasonable to do so."