Here's what is known about the condition. 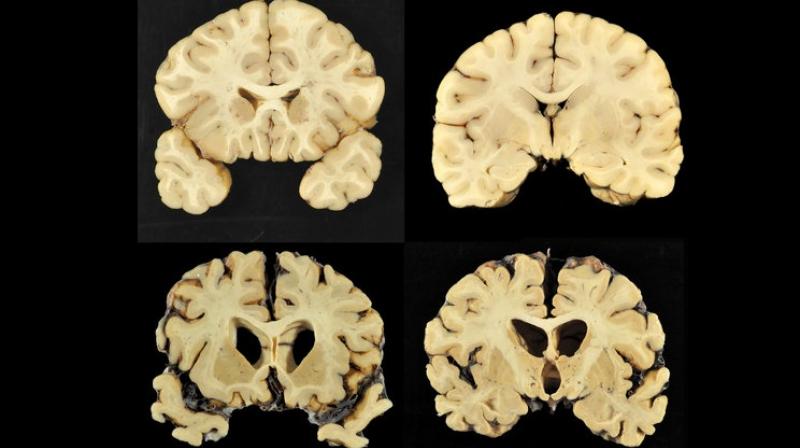 This combination of photos provided by Boston University shows sections from a normal brain, top, and from the brain of former University of Texas football player Greg Ploetz, bottom, in stage IV of chronic traumatic encephalopathy. (Photo: AP)

Chicago: Researchers are tackling fresh questions about a degenerative brain disease now that it has been detected in the brains of nearly 200 football players after death. The suspected cause is repeated head blows, an almost unavoidable part of contact sports.

Here's a look at what's known - and what still needs to be learned - about the condition:

The largest report to date on chronic traumatic encephalopathy included 202 brains from football players at the youth, college and professional level, all donated post-mortem to a Boston brain bank. CTE was detected in all but one of the 111 NFL players studied, 90 percent of the college players and 20 percent of the high school players. It was absent in two younger players' brains. A previous report had described the disease in an 18-year-old football player, but finding additional cases at the high school level raises new questions about the game's safety for young players.

HOW COMMON IS CTE?

The high occurrence of CTE in donated brains surprised researchers at Boston University and the VA Boston Healthcare System, whose brain bank is billed as the world's largest focusing on traumatic brain injury and CTE. But whether CTE is truly common in sports or the general population isn't known. Most brains studied for CTE have been donated by family members because of concerns about mental symptoms that might be related to the disease - they don't come from a random population of people. Some experts think it isn't common since many athletes get repeated head blows and never develop symptoms.

Repeated knocks to the head are the most likely cause of CTE. Scientists believe genes probably play a role and may explain why some people with repeated head blows never develop the disease. Lifestyle habits including diet, alcohol and drugs may also somehow contribute.

HOW DO HEAD BLOWS AFFECT THE BRAIN?

Though the brain is jello-like in texture and cushioned in cerebrospinal fluid, a powerful hit - from a hard tackle, a fist or bomb shock wave - can cause a concussion, forcing the brain to ricochet back and forth inside the skull. Besides bruising and swelling, researchers believe that force can cause the brain to elongate, stretching nerve cells and their axons - fiber-like parts that transmit messages between cells. With a mild blow, these cells may return to normal, but a forceful hit may cause them to die.

Common symptoms after a concussion include dizziness, confusion, headaches, nausea and sometimes temporary loss of consciousness. CTE has been linked with repeated concussions and some scientists believe it may occur after repeated head blows that don't cause any obvious symptoms. But they still don't know how many head hits is too many.

WHAT HAPPENS IN CTE?

The disease involves progressive brain damage, particularly in the frontal region, which controls many functions including judgment, emotion, impulse control, social behavior and memory. A signature feature is abnormal deposits of tau protein that accumulate around small blood vessels in brain crevices.

Tau occurs normally in brain cells, helping them maintain their shape and function. But researchers believe that multiple head blows may dislodge tau protein from the cell structure and cause it to form clumps inside nerve cells. These tau clumps can damage and ultimately kill nerve cells, and can spread as the disease progresses. At advanced stages, brain shrinkage may occur. Abnormal tau deposits in different shapes, patterns and locations have been implicated in other brain diseases, including Alzheimer's Parkinson's disease and amyotrophic lateral sclerosis or ALS.

WHAT ARE THE SYMPTOMS?

Research suggests early stages of CTE may cause no obvious symptoms. Many players whose autopsies showed more advanced disease had experienced personality changes, aggressive behavior, paranoia, poor memory, attention problems, dementia and depression. Some died by suicide. Whether the tau changes associated with CTE cause those symptoms is unclear.

IS IT JUST A FOOTBALL DISEASE?

What's now called CTE was once thought to mainly affect boxers; the earliest known reference in the medical literature was a 1928 report by a New Jersey pathologist who referred to a "punch-drunk" syndrome.

The first published finding about CTE in a retired NFL player was a 2005 report on Pittsburgh Steelers Hall of Famer Mike Webster. CTE also has been found in other contact sports including soccer, baseball and ice hockey; in soldiers exposed to bomb blast waves; domestic violence victims; and in psychiatric patients who engaged in repeated head-banging.

Thousands of former players are due to get damage awards from a $1 billion settlement stemming from lawsuits claiming the league hid what it knew about a link between concussions and CTE. Earlier this year the NFL hired a Vanderbilt University sports concussion expert, neurosurgeon Dr. Allen Sills, as its first full-time chief medical officer. Injury risks are part of football, but the league is trying to make the game safer, Sills said.

New "no-go" criteria this season for when to keep injured players out of the game list confusion, amnesia and loss of consciousness after an on-field injury. Injured players will be evaluated in new portable sideline exam tents, for privacy and to reduce distractions for those with suspected concussions. There also will be a ban on "leaper" block attempts, where a defender leaping over the offense to block a kick is tackled midair.

Researchers are seeking to refine brain scan techniques to identify CTE tau deposits in living brains. They're also looking for clues in blood or cerebrospinal fluid that would allow them to diagnose CTE before death. If such markers exist, they could be targets for drug treatment.

Symptoms associated with CTE can sometimes be managed with drugs or other treatment, but there's no cure and the only way to prevent it is to avoid head blows. Studies are underway to identify if specific genes make certain athletes more vulnerable to brain damage from head blows, and researchers hope to pin down how many head blows it takes to develop CTE.