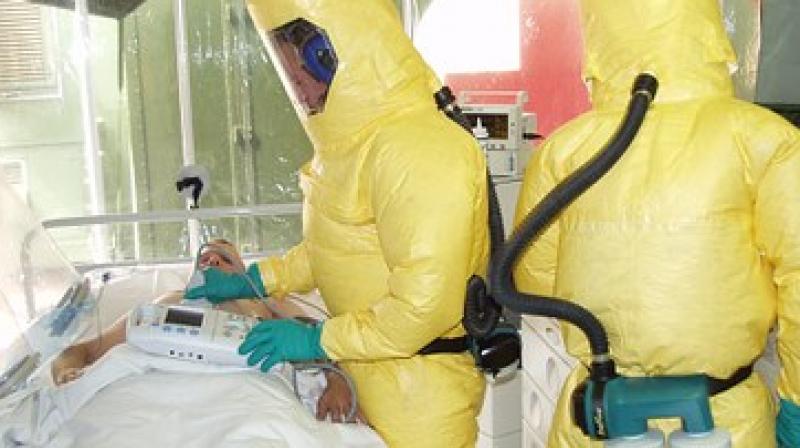 More than 11,000 people died during the Ebola outbreak in West Africa from 2013-16, demonstrating both the deadly nature of the virus and the limitations of the medication used to fight it.

“Our goal is to make an antibody-based therapy that can protect against all strains of Ebola, and potentially Marburg virus, as well,” said Sarah Wootton, from University of Guelph in Canada.

“It would be used to stop the spread of the virus in outbreak situations,” she said.

Monoclonal antibody therapies (mAbs) hold promise for the treatment of Ebola virus infections. However, mAbs are costly to produce and provide only short-term immunity, Wootton said.

The new approach, described in the Journal of Infectious Diseases, delivers a monoclonal antibody gene through a viral vector, something that has been done before, most notably with human immunodeficiency virus.

The process bypasses the need for the host to generate a natural immune response, which can take several weeks to occur, and often too late for Ebola victims.

Other researchers have used AAV extensively to treat a variety of genetic disorders. The US Food and Drug Administration (FDA) has recently approved an AAV gene therapy to treat a rare retinal disorder.

“If you use an AAV gene therapy vector to deliver the DNA blueprint to a cell, that cell will produce a protective antibody against Ebola virus, which is then secreted into the bloodstream and protects mice from infection,” said Wootton.

The approach provided 100 per cent protection against Ebola infection in mice using two different types of mAb, and 83-per-cent protection with a third.

A “cocktail” of two antibodies provided sustained protection against Ebola for up to five months.

Once the antibody gene is delivered, antibodies will be continually produced in the bloodstream, Wootton said.

Mice in the laboratory expressed the antibody for more than 300 days.

“We are hoping to use this technology in a post-exposure scenario. Let’s say someone has been exposed to Ebola. The idea would be to give them this AAV vector to start producing the antibodies that prevent death,” she said.

“Developing pan-Ebola or pan-filovirus vaccines and therapeutics has been a goal for all the scientists in the field,” said Xiangguo Qiu at Winnipeg’s National Microbiology Lab, Public Health Agency of Canada.

“Our preliminary data is really encouraging and we will move forward to develop pan-Ebola/pan-filovirus cocktails,” said Qiu.