Zika began spreading in Brazil in April 2015 and the country saw more than 260,000 probable cases in 2016, according to Health Ministry. 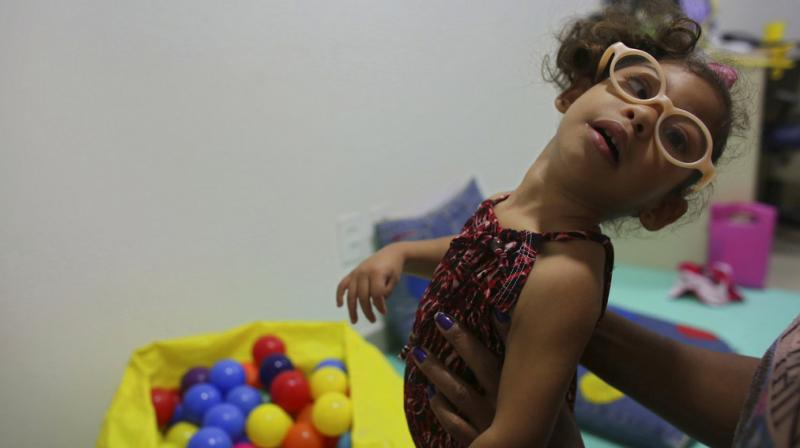 No vaccine is currently on the market, though several are being developed. (Photo: AP)

Sao Paulo: Three years ago, Brazil experienced a major Zika outbreak that led to the revelation that the virus can cause severe birth defects in babies whose mothers were infected during pregnancy. Here's a look at what scientists know today about Zika and its effect on developing foetuses.

The Outbreak: Zika began spreading in Brazil in April 2015 and the country saw more than 260,000 probable cases in 2016, according to the Health Ministry. Cases of microcephaly, an abnormally small head in babies, and other developmental deficits linked to Zika began surging in 2015, when more than 960 were confirmed; the next year saw more than 1,800.

Many infections, like rubella and HIV, can cause microcephaly. Exposure to toxic chemicals and genetic abnormalities can also cause it. Since the 2015 outbreak, a panel of experts convened by the World Health Organization has concluded that Zika is also a cause. But scientists have been puzzled by the fact that Zika appeared to lead to microcephaly more often in northeastern Brazil than it did in other places, and they are still not sure why, said Ganeshwaran H. Mochida, a pediatric neurologist and researcher at Boston Children's Hospital. One hypothesis is that if a mother has already had dengue, which is related to Zika, Zika may be more likely to cause microcephaly in her baby.

Link between Zika and microcephaly

Scientists are not sure why a spike in microcephaly cases wasn't reported during previous Zika outbreaks. It could be that an increase was overlooked, or the outbreaks weren't large enough to produce a noticeable uptick in brain abnormalities. One study has suggested that a more recent mutation to the virus may have made it more likely to lead to microcephaly.

"This may not be the whole story," said Mochida, the neurologist. "I don't think that this explains everything."

What does microcephaly mean for children?

On the most severe end of the spectrum, children with microcephaly have significant neurological disabilities that affect vision and hearing and they may not ever walk or speak. Scientists are still studying the effects of less severe cases. Microcephaly does not necessarily reduce a person's lifespan, but it can cause complications that do. For instance, many children have trouble swallowing, which leads them to aspirate, which can lead to pneumonia.

What else is unknown?

Zika has also been linked to a range of other problems in babies, like seizures, restricted limb movement and poor coordination and balance. Scientists are still trying to figure out if Zika may cause problems that don't become apparent until later in a child's life, even when babies appear to be healthy at birth.

Is there a vaccine for zika?

No vaccine is currently on the market, though several are being developed. The most advanced of these was developed by government scientists at the U.S. National Institute of Allergy and Infectious Disease and is being tested at 16 sites in the U.S., the Caribbean and Latin America.

Dr. Anthony Fauci, director of the institute, says approval for the vaccine could come in 18 months if scientists get data from a future outbreak. Barring an outbreak, approval could take three or more years.