Smog kills more than one million Indians every year and Delhi has worst air of any major city on planet, World Health Organization says. 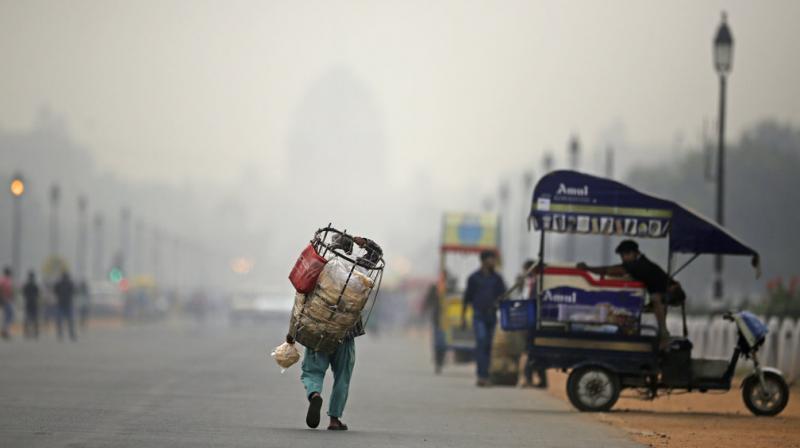 As cooler air traps pollutants close to the ground, Delhi's levels of PM2.5 -- particles so tiny they can enter the lungs and bloodstream -- often soar to beyond 30 times the safe limit. (Photo: AP)

New Delhi: Yogesh Kumar wheezes after life-saving surgery to remove a diseased lung, but his surgeons wonder how long he can last outside hospital breathing some of the world's dirtiest air.

Smog kills more than one million Indians every year and Delhi has the worst air of any major city on the planet, the World Health Organization says.

Every November, hospital wards start filling with gasping patients as a tell-tale greyish haze shrouds the city of 20 million.

"Delhi air is like a death sentence for him," said Srinivas K. Gopinath, a thoracic surgeon at Sir Ganga Ram hospital in the Indian capital where 29-year-old Kumar was treated.

Gopinath fears for his patient, who survived tuberculosis but is now at the mercy of another invisible killer.

As cooler air traps pollutants close to the ground, Delhi's levels of PM2.5 -- particles so tiny they can enter the lungs and bloodstream -- often soar to beyond 30 times the safe limit.

One of the worst times is around the Hindu festival of Diwali as smoke from millions of crackers set off by festive revellers mingles with car exhaust, factory emissions, construction dust and smoke from crop fires.

Pollution readings can reach so high they do not register on scientific instruments.

Kumar is due to be discharged from hospital around the time of the festival on Wednesday.

"Inside (the hospital) the air quality is maintained, but once he steps out the bad air will start affecting him," Gopinath told AFP.

"His resistance is weak. He has only one lung which is now really precious. Imagine having to cope up with such bad air with only one lung?"

But he is far from alone.

Children, the elderly and those with respiratory ailments like asthma suffer the most from Delhi's hazardous smog, which does not lift until around late February.

Exposure to toxic air kills hundreds of thousands of children every year, the WHO said in an October report.

Children breathe more rapidly than adults, taking twice as much polluted air into their tiny bodies.

It has devastating effects on children in Delhi, say doctors who see it first hand.

"A child who is born in Delhi is taking in gulps of bad air which is equivalent to smoking 20 to 25 cigarettes on the first day of his life," said Arvind Kumar, a prominent Delhi lung surgeon.

For years the surgeon has tirelessly campaigned to raise awareness about the dangers of air pollution, which the WHO last month likened to the tobacco epidemic.

On hospital grounds this weekend Kumar ordered the installation of giant, artificial lungs fitted with filters to demonstrate the damaging effects of smog.

Many of the patients he sees already bear physical scars from breathing a lifetime of Delhi air.

"These are non-smokers, but even they have black lungs," he told AFP.

"Even teenagers have black spots on their lungs. This is frightening."

Despite reappearing every winter, official efforts to combat Delhi's smog have been ineffectual.

Emergency measures such as banning construction, cutting down traffic and prohibiting the use of diesel generators have had little effect.

More long-term solutions remain elusive. State governments have refused to cooperate on root causes of the crisis, such as farmers using fire to clear their land on the outskirts of Delhi.

Surgeon Kumar said pollution needed to be tackled at its source.

"Everything else is just eyewash," he said.