The air pollution is high due to lower temperatures, wind speed and higher relative humidity. 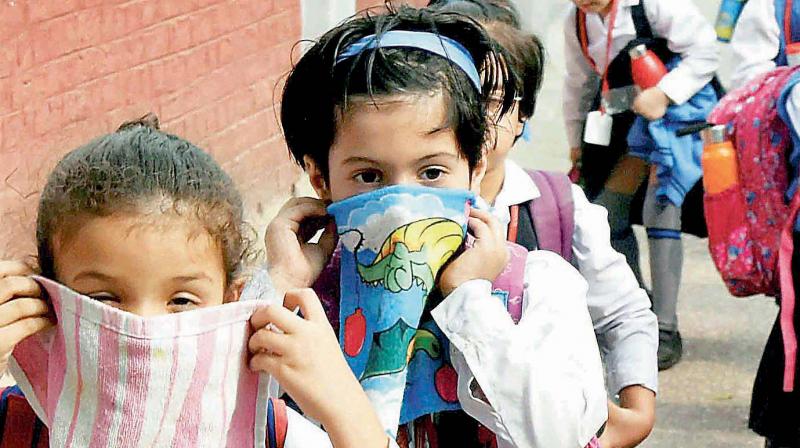 Winter spells respiratory woes for many, as the poor quality of air deteriorates further with the burning of Diwali fireworks.

The quality of air is worse in the months of winter from the end of October to January as dust particles remain suspended in the air for a longer duration of time. The air pollution is high due to lower temperatures, wind speed and  higher relative humidity.

Adding to this is the festival season and it has been found that quality of air is compromised both indoor and outdoor, which affects children, senior citizens and those who have already been diagnosed with respiratory disorders. Exposure can be decreased by limiting the time spent outdoors or reducing the duration or intensity of outdoor activity during times of peak vehicular traffic and also during the bursting of crackers, explains Dr S. Mallikarjun Rao, a senior consultant pulmonologist and chest specialist at Apollo Hospitals.

Q Diwali coincides with the onset of winter and with vehicular pollution levels rising along with particulate matter, how must children and the elderly be protected?

The air quality in major metros is compromised largely due to vehicular pollution. Then there is a festive celebration which adds to the concentration of particulate matter and also metals. During Diwali there is increase in air pollution, and children, pregnant women and the elderly must be careful. Those who have been identified with respiratory diseases are advised to not venture out during times of celebration. The use of a mask is also advised to these high-risk groups.

Q The festival sees families go out to meet their near and dear ones. What travel precautions must they follow?

Travelling during peak hours within city must be avoided. Choose to travel by train, metro rail instead of buses and bikes, as it helps one avoid vehicular pollution. The reason road travel must be avoided is because particulate matter and gaseous pollutants react with nitrogen and volatile organic compounds to create a deadly combination in the air. The particulate matter does not disperse and continues to be in the air for a longer period of time. Due to this reason, children living close to the main roads or places where there is heavy vehicular traffic must not play outside in the evening hours as it can lead to respiratory problems.

Q Respiratory problems erupt suddenly. Isn’t it important that families must have some medication or devices handy to deal with the situation?

Yes, respiratory problems are found to erupt suddenly. Often there is confusion, as those who have breathing problems are sometimes unable to explain the uneasiness that they are feeling. Hence in new cases, we find that people take time to come to the hospital. During the festival season, hospital emergency staff is trained to ensure that the respiratory problems are evaluated in the first line of treatment. Those who have been identified with respiratory illness should use inhalers and nebulisation medication. There must also be extra doses kept to tide over a crisis before seeking specialist aid.

Q What are the general precautions that people must take during these winter months due to the rising pollution levels in the cities?

During the winter months, avoid too much exposure to the outdoor environment and try to spend minimum time travelling.
1) Travel in trains or use the metro rail, as it will help avoid vehicular pollution.
2) Keep a mask handy, so that it can be used in areas where there is heavy pollution.
3) Opt for carpooling if one has to travel long distances.
4) Reduce indoor pollution by not using mosquito coils, or burning incense sticks or agarbattis.
5) Stop smoking and discourage others from smoking.

Q Recent reports have stated that children are susceptible. How can their immunity be strengthened?

Children are at a greater risk of contracting a pollution-related respiratory illness because of their height and vehicular smoke. They should use masks, reach school a little early to avoid the late rush, which is when most vehicles bring children to schools.

Q What is the role of food in managing respiratory illness? What kind of food should be preferred and avoided  during this season?

Generally, fruits are very important to enhance immunity. Some people are allergic to fruits; they can avoid them and eat dry fruits instead.