This may be because younger kids are learning how to act around dogs and may not recognize cues that a dog is upset and ready to bite. 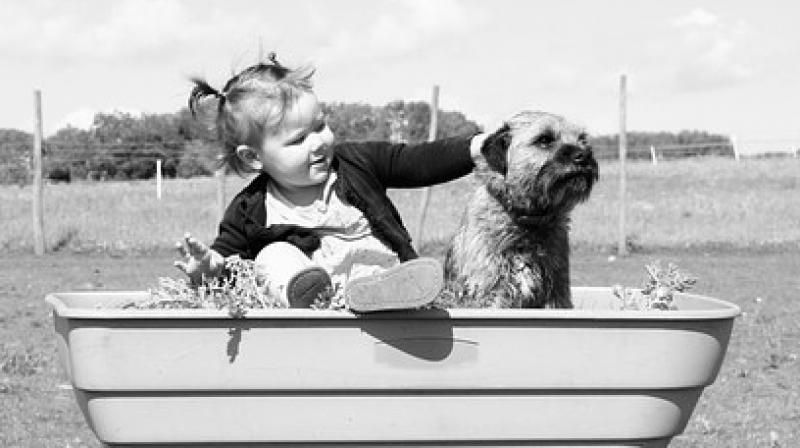 Since they’re too young to be taught how to interact with dogs, it’s up to parents to learn about dog safety. (Photo: Pixabay)

Infants and toddlers up to 2 years old make up a large proportion of kids in the US who are treated at trauma centers for dog bites each year, according to a recent study.

Since they’re too young to be taught how to interact with dogs, it’s up to parents to learn about dog safety, researchers write in the journal Injury Prevention.

“Dogs are important members of the family, but it’s also important to remember that they are dogs and can be a potential source of injury for children,” said senior study author Rita Burke, a community health researcher at Children’s Hospital Los Angeles in California.

“Even if a family with children doesn’t own a dog, neighbors and friends own dogs, so this is relevant to all families with children,” Burke said in a telephone interview.

About 37 percent of US households own a dog, which works out to about 70 million dogs across the country, Burke and her colleagues note. Some 5 million people in the US are bitten by dogs each year, half of whom are children.

To see which age groups are most at risk and assess other characteristics of these incidents, the researchers analyzed 7,900 cases of dog bites logged between 2007 and 2014 in the National Trauma Data Bank for patients 17 years old or younger.

They found that 34 percent of the kids were 6 to 12 years old, and 30 percent were 2 years old or younger. The majority of cases, nearly 84 percent, occurred at home. A little more than half of the bites occurred on the face, but at the same time, nearly 80 percent were considered minor injuries. Although more girls received bites than boys in this study, the boys tended to have more severe injuries.

“Traditionally, boys have a higher prevalence for bites, but maybe more girls are bitten in the younger age groups, which are the cases that go to trauma centers,” Burke said. “Maybe our data doesn’t include more injuries in boys that go to community hospitals.”

Burke and colleagues were also surprised to see so many injuries in the youngest age group, which tended to happen mostly at home and to be more severe than injuries in older kids. This may be because younger kids are learning how to act around dogs and may not recognize cues that a dog is upset and ready to bite.

“This is where adult supervision becomes critical,” Burke said. “I know it’s hard not to leave your child alone with your dog, especially as a trusted member of the family, but there’s really no substitute for supervision.”

The study authors also suggest so-called live dog training for parents, especially those with children under 2. This type of training discusses dog behavior and supervision, even around pets that are well-known. It also highlights face-to-face interactions among dogs, kids and parents.

The study team also recommends training that includes how to detect signs of aggression in dogs for kids in the older 6-12 age group.

“When kids get bitten, especially in the face, it can cause long-term cosmetic problems and scars,” said Dr. Amr Abdelgawad of Texas Tech University Health Sciences Center in El Paso, who wasn’t involved in the study.

“It’s not a simple decision to have a young toddler with a dog at home,” Abdelgawad said in a phone interview. “Parents should take more precautions as the child becomes curious about the dog, and the dog tries to explore the toddler.”

Along with live dog training, researchers are studying how virtual reality and simulated interactions could help both parents and kids, said David Schwebel, director of the Youth Safety Lab of the University of Alabama at Birmingham, who wasn’t involved in the study. As children get older, video-based testimonials and internet-based games are proving effective and less expensive, he added.

“The primary message is clear: All dogs can bite. It is hard for us to remember this, as we love our dogs, and they serve us in so many valuable ways,” Schwebel said by email.

“But if provoked, any dog - even the best-trained and most loved dog - can bite.”