Wear sunglasses, swim goggles and/or a hat with a brim to enjoy yourself without worry! 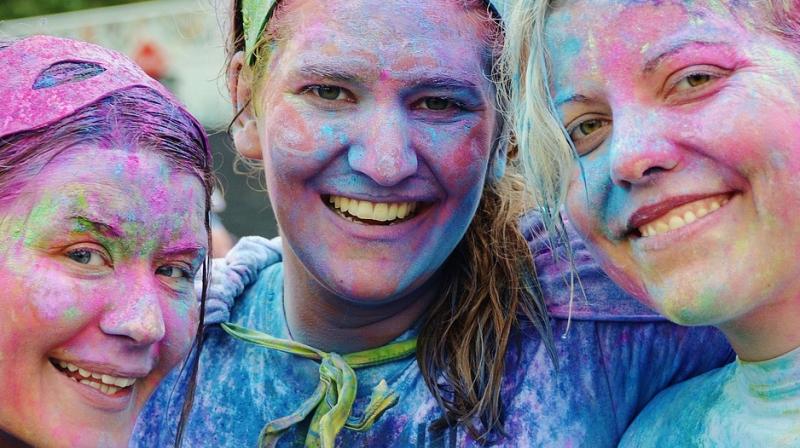 Holi is an annual festival that marks the onset of spring. For festival goers, it also represents a time of forgiveness, renewed friendship and the triumph of good over evil. The celebration is often referred to as the ‘holiday of colour,” which is exactly where the problem lies.

“Throwing of (powder or liquid) colours on each other is the hallmark of this festival,” lead author Dr. Shikha Gupta of the Prasad Center for Ophthalmic Sciences in New Delhi said in an email.

Traditionally, Holi colours were made from natural sources, including berries, flowers, spices and other plants, according to India’s National Council of Science Museums.

Manufacture of the powders and liquids is poorly regulated, however, and testing has found the modern versions to contain substances such as malachite green, a suspected carcinogen, rhodamine and gentian violet, Gupta’s team writes in the journal Eye. Other common contaminants include lead oxide, copper sulphate, mercury sulphite and mold, the authors note.

These contaminants, through contact with skin, respiratory tract or eyes, can cause complications, the authors write.

For their study, Gupta and colleagues assessed 13 patients complaining of eye pain, the sensation of a foreign particle or excessive redness and eye tearing. All patients had recently attended a Holi festival celebration.

Among these patients’ diagnoses were punctate keratopathy, an inflammation of the cornea, and epithelial defect, a form of eye irritation caused by a scratch, foreign bodies or chemical exposure.

The researchers concluded that punctate keratopathy and epithelial defect specifically were directly related to patients’ exposure to the toxic chemicals ubiquitous in Holi coloured-powder compounds.

“These powdered alkaline substances are dangerous because at first you don’t feel them,” said Dr. Andrea Thau, a recent president of the American Optometric Association who wasn’t involved in the study.

“If not irrigated from the eye as quickly as possible, these particles gradually create more and more damage, destroying and disrupting the outer cells of the cornea,” she told Reuters Health in a telephone interview.

“In some patients, the effect is transient,” Gupta said. “Some patients heal in yet another two weeks, but some others may take three months to completely heal and have normal ocular surface.”

Although rooted in Indian tradition, Holi is widely celebrated around the world including in North America, South America and Europe. And Holi is not the only time these potentially toxic powders serve as a main feature in celebratory events.

colour runs - a type of non-traditional road race that celebrates health, happiness and camaraderie among participants - are increasing in popularity. Competitors adorn themselves in vibrant, colour-powdered t-shirts. Spectators also throw powder as runners pass by - powders engineered from a potentially similar hazardous formula associated with those used during Holi festival.

More research is needed to establish a cause-and-effect relationship, Gupta said. However, every year “there is a spurt in the number of patients presenting with Holi colour-related injury to the emergency department during the time of Holi festival.”

Holi powder remains unregulated in most areas of the world, the authors say. They call for “government imposed bans on prohibition of manufacturing, sale and use of these chemicals” to be made mandatory.

In the meantime, specialists recommend increasing community awareness and emphasizing the health risks associated with Holi coloured-powder and strategies for protecting oneself.

“Wear sunglasses, swim goggles and/or a hat with a brim,” Thau advised. “This will allow participants to enjoy the beauty of the festival without exposing them to the danger of these substances.”