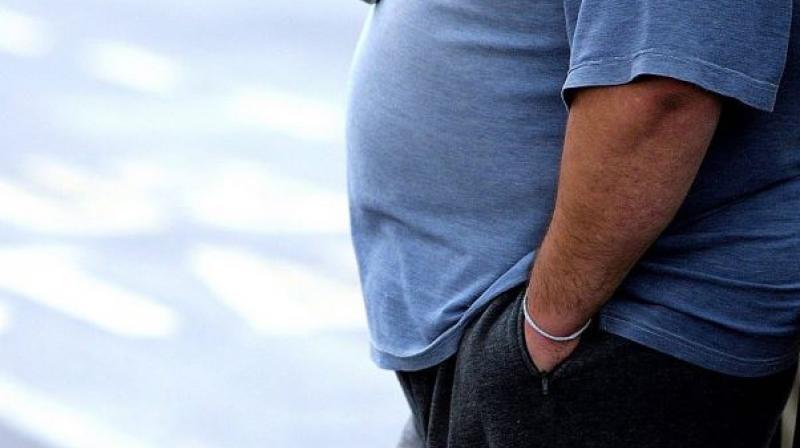 Being overweight and having diabetes can change the brain structure and can even cause Alzheimer's disease. (Photo: AFP)

Atlanta: Overweight and obese people with early-stage type 2 diabetes have more severe abnormalities in brain structure and cognition than normal-weight people with type 2 diabetes, researchers suggest.The study has been published in Diabetologia, the journal of the European Association for the Study of Diabetes.

Having type 2 diabetes and being overweight, then, can combine to have a greater effect on brain structures."There's a general agreement that type 2 diabetes is a risk factor for various types of both structural and functional abnormalities in the brain," said Dr. Donald C. Simonson, a co-author of the study and an endocrinologist specializing in diabetes. "Simple obesity also shows the same type of abnormalities ... in a milder stage. You can see where it's not quite exactly normal but not quite as bad as someone with diabetes.

"So, if you have both, will it be worse than if you have them alone? That's what we looked at in this particular study," said Simonson, who teaches at Harvard's T.H. Chan School of Public Health.

Dr. In Kyoon Lyoo, lead author and a professor at the Ewha Brain Institute at Ewha Womens University in Seoul, South Korea, wrote in an email, "As obesity has been known to be associated with metabolic dysfunction, inflammation, and brain changes independently of diabetes, we expected that brain alterations might be more pronounced in overweight/obese participants with type 2 diabetes."

Effects on the brain

Lyoo, Simonson and their colleagues designed a study around 50 overweight or obese people age 30 to 60 who had been diagnosed with type 2 diabetes.

Fifty normal-weight people diagnosed with type 2 diabetes and 50 normal-weight people without diabetes also participated. These additional participants were age and sex matched to the original group. Those diagnosed with diabetes were also matched for disease duration. Standard body mass index ranges defined "overweight" (having a BMI of 25 to 29.9), "obese" (greater than 30) and "normal weight" (18.5 to 25).

The researchers used magnetic resonance imaging to examine each participant's brain structure, including the thickness of the cerebral cortex and white matter connectivity. Gray matter in the brain contains the neuron cell bodies, whereas white matter contains bundles of nerve fibers and its job is to process and send signals along the spinal cord.

The researchers chose to study thickness and connectivity "because these could be sensitive markers of diabetes-related brain changes, and could be reliably quantified by using magnetic resonance imaging," Lyoo explained.Participants also were tested for memory, psychomotor speed and executive function, since these are known to be affected in people with type 2 diabetes.The results aligned with the researchers' initial assumptions, Lyoo said.

Clusters of gray matter were significantly thinner in the temporal, prefrontoparietal, motor and occipital cortices in the brains of diabetic participants than in the non-diabetic group, the study found. More thinning of the temporal and motor cortices could be seen in the overweight/obese diabetic group compared with normal-weight diabetics. Separately and collectively, these areas of the brain impact motor control, executive function, body awareness, concentration and other cognitive functions.

In particular, the temporal lobe appears vulnerable to the combined effects of type 2 diabetes and being overweight or obese, the researchers say. The temporal lobe is implicated in language comprehension and long-term memory. The brain has been the last frontier in the study of complications of diabetes, Simonson said.

"Diabetic retinopathy, eye disease, is reasonably well-understood," he said. "The same is true of kidney disease, amputations -- we understand much better what causes them and how to prevent them.

"But the brain has been the proverbial black box. It's incredibly complicated, and you can't directly study it. You can't go in and take samples," he said. "The last several years, the techniques of MRI got good enough that we could really look carefully at the brain."

Most of the initial work in the very late 1990s was done in Alzheimer's, schizophrenia, depression and other classic psychiatric diseases, but then scientists began to look at other diseases including diabetes, explained Simonson. At this point, researchers around the world began to see connections.

"You can see a person with depression has thinning of the surface of the brain in certain areas, and you go in and do the same study with somebody with diabetes, and they have thinning in the exact same areas," Simonson said. And diabetes may be a predisposing or risk factor for developing Alzheimer's, he said.

"You see the same types of abnormalities in a milder form in the brain in people with diabetes that you see in people with Alzheimer's disease," Simonson said. According to Dr. William T. Cefalu, chief scientific, medical and mission officer of the American Diabetes Association, the study is consistent with previous research.

"The presence of overweight and obesity have been shown in other studies to be associated with early structural changes in the brain, and may contribute to cognitive issues," said Cefalu, who was not involved in the new study. "The current study implies that obesity/overweight status in individuals with diabetes may also contribute."

That said, longer-term and more definitive studies are needed to evaluate that aspect.In the end, Simonson said, another question is more important: "What can you do to prevent it? That's the big question."