Straight from the Koli kitchen

The menu mainly includes dishes that are savoured among the community. 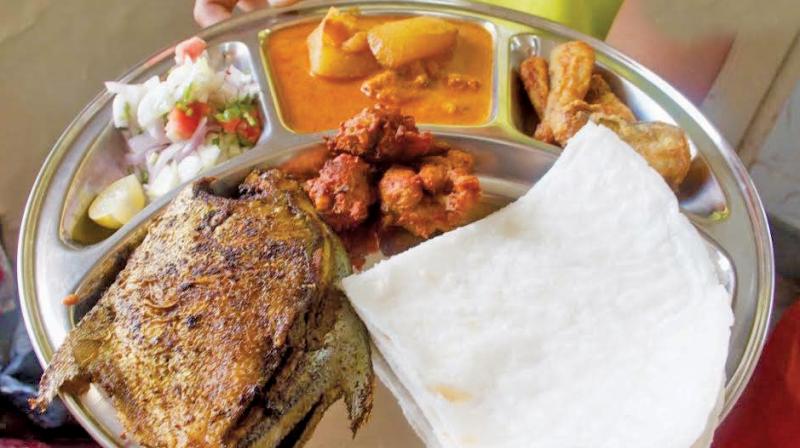 The city’s traditional fisher folk, Kolis, are best known for their vocation, which often overshadows their scrumptious culinary offerings. A household from Versova Koliwada is looking to change this. Rajini Tapke and her daughter Harsha Tapke will host a dining experience this weekend in their home, which will aim to serve as an introduction into the world of Koli delicacies.

The menu mainly includes dishes that are savoured among the community. Expect mori fry, chunks of shark meat dipped in batter and fried; ribbon fish soup, best described as a thin soup with kokum; surmai fry, kolumbi cha ambat, a tangy prawn gravy and sol kadi, a digestive drink which gets its sourness from kokum. The star of the meal however, Harsha maintains, is maklea kheema, which is kheema made from squid. Slow-cooked for two hours with onions, tomatoes and spices, the squid is prepared to perfection. Ginger, garlic, kokum and spices are pounded with a mortar pestle to make sure the ingredients retain its freshness. “Cooking squid can be quite tedious since you need to make sure it is perfectly cooked,” Harsha explains, adding that it is one of the main reasons why it is mostly never included in restaurant menus.

Rice bhakri is another dish that is a famous take on the traditional chapatis.  Rice, ragi and jowar are roasted and served a part of the main course. “Wheat tends to burn quickly. And when you are busy in the kitchen, you rather opt for something that you don’t have to pay too much attention to,” says Harsha. The community does whip up a few vegetarian dishes too. She elaborates, “Since a lot of women fast during the week, there are a lot of vegetarian offerings. However, these dishes are fuss-free.”

The Kolis also make use of the homemade spice blend, which comprises five different types of chilli, garam masalas, turmeric and coriander, a blend that Harsha too swears by. “This is a go-to traditional masala which is made in every Koli home. We make at least 15 kilos of it at home annually — that’s how much we use it!”

Surprisingly, sugar too is an ingredient that is used in their spread. She says, “A pinch of sugar is sprinkled right after the fish is fried.  Sugar helps reduce the bitterness.”