10 wedding cuisine trends that are here to stay

Change in traditional Indian practices is easily evident in emergence of new combinations of wedding cuisines. 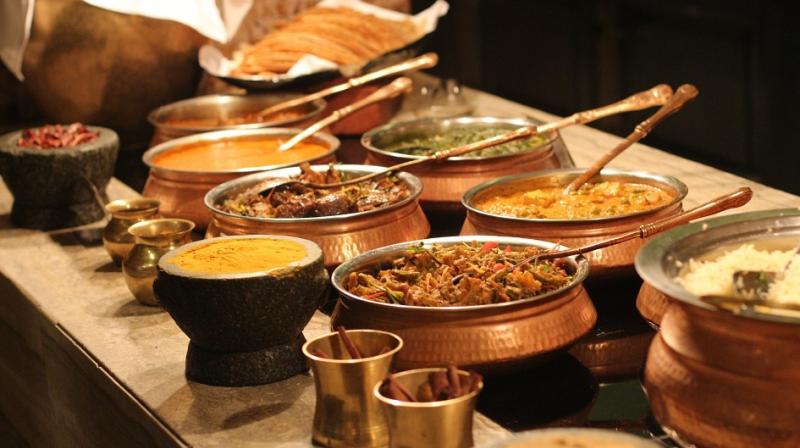 Traditional weddings are undergoing a visible metamorphosis where the couples prefer to have a wedding ceremony that is more reflective of their personalities. (Photo: Pixabay)

‘Shadi ka khana’ is considered the ultimate feast where delightful mouthwatering cuisines are the centre of attraction for most of the guests. Traditional wedding benchmarks today are undergoing a visible metamorphosis where the couples prefer to have a wedding ceremony that is more reflective of their personalities, instead of adhering to old dogma. Traditionally, the groom straddles a mighty horse and goes forth to marry the blushing bride. However, it is no longer surprising to see the groom riding his Harley Davidson to the wedding.

Presently, change is the constant state of traditional Indian practices, and this trend is easily evident in the emergence of new combinations of wedding cuisines. “Where there was formality, now there is fun and flamboyance,” says Kunal Rai, VP - Weddings & Events at Tamarind Global, highlighting ten trends which are popular in wedding cuisines.

Niche cuisine in the house: People have become comfortable with deviating from the standard practices followed during a wedding. Earlier, the same 10-12 dishes were very popular and used to be the usual fare at almost every wedding. However, modern palate demands a selection of dishes that must be freshly prepared and also be healthy. People aren’t afraid to experiment with hybridization of food either.

International cuisine is in: People today are well-travelled and have a more evolved palate where the food they like doesn’t just belong to their home country. So the presence of international cuisines at weddings is no longer a rarity. While browsing through the food stalls one can see names of dishes like ‘Hakkasan’ or ‘Zuma’ enticing the curious guests.

Even artisanal cheeses like Burrata from Puglia, Truffle and Mushroom bars, Black radish have become prominent at Indian weddings. For high profile weddings, such a diverse and exotic menu is a necessity, says Kunal, “At VIP or high profile weddings, guests from all over the world come to be a part of the celebrations. Based on the guest list, we modify the menu, but more often than not it becomes imperative to prepare a well-thought out proposal for international cuisines in advance.”

Indian regional cuisine: Having said that, an Indian wedding wouldn’t be an Indian wedding without Indian food! Would a Mumbaikar not have a Vadapav stall, or would a Delhite give pass to the chat counter at their wedding? Not if they want a riot from the guests. Every couple, and family, wants to highlight their cultural and regional heritage in the wedding theme.

People are willing to go all the way to infuse the element of authenticity when it comes to wedding cuisine. It is not uncommon for specialized chefs to be flown in from different parts of India to the wedding destination.

Even if one is holding their wedding at Lake Como, Italy they can delight their guests with a set up of Indian foods, such as ‘Chaatwala scenes’, assorted variety of Muthuswamy’s South Indian spread, Kolkata’s famous street food ‘Jhalmuri’, ‘Puchka’ and a lot more. Tamarind Global has successfully executed many destination weddings where such set-ups were not only put in order but also modified according to the local materials available at the destination of the wedding.

Food Stylisting: You opt for the best cuisines from across the globe but imagine presenting it in a style that becomes the talk of the town! People are now hiring a food stylist to work with the caterer and designer and translate the entire experience into a visual delight that is consistent with the theme of your function. From the servers to the platters, the cutlery and the buffet table, the stylist will align the food decor with the theme of the wedding to impressive levels. A unique trend in weddings to add a little something extra to the food.

Concept brunches: When we think of wedding food, our mind immediately goes to a hearty dinner followed by variety of lip-smacking desserts. But the concept of brunching is also gaining all-around favor as it gives mind-boggling variety of foodstuffs in one go.

From egg station, to waffle station that has specialized waffles with innovative fillings, to sliders, cakes, bagels, tacos, nachos, rice, pasta and even desserts, wedding brunches are winning over the hearts of people. Even evening brunches can be designed to allude to rustic themes of village set-ups or by bringing in Parisian romance in the décor and menu.

Adding the personalized touch: Gone are the days when the wedding used to be more of a celebration for the families and guests than the married couple. Nowadays, a lot of couples are bringing a personalized touch to their weddings with their favorites being featured apart from the others. While preparing the wedding menu, the couple adds their favorite foods and cuisines to be served to them at their table.

Even the beverages are uniquely blended using the favorite ingredients of the couple and their friends. So don’t be surprised if you see drinks like ‘Bridesmaids' Caribbean Dream’ or ‘Groom’s Spicy Shots’ on the bar menu. Similarly, the bride and groom are also vocal about which desserts they want at their wedding, and how the desserts must be customized according to individual taste.

Meal on wheels: Food trucks are not uncommon in metropolitan cities like Delhi NCR and Mumbai. Offering everything from Tandoori Chicken, Kebabs and Cocktails to famous International dishes like sushi, mini-burgers and a lot more, food trucks are all the rage with foodies and now even the wedding planners.

The array of specialties which one gets on a platter from a food truck adds an element of quirkiness to the overall wedding. One only need to brief the caterers about what kind of cuisines is wanted at their wedding, as well as how it should be presented, and that is the job done!

Celebrity chefs onboard: For those who can afford it, a celebrity chef designing the menu is nothing less than a dream come true. At high profile weddings, celebrity chefs have their own space and autonomy to work their magic. In many cases, the chefs come with their own teams to take care of each minute aspect of the catering.

Famous American Chef Peter Callahan, known for his legendary inventiveness and who is often called the master of food miniaturization is one such celebrity chef. He oversees everything from the customization of the menu, to beverage coordination, to style of trays, buffets, plates and bar accessories. His team, which consists of highly trained professionals, executes flawless service, strictly adhering to the service guidelines set by Chef Callahan.

Molecular gastronomy: If science tickles your senses and gives you the gastronomic rush, then molecular gastronomy would definitely appeal to you. British celebrity chef Heston Blumenthal popularized the use of principles of chemistry, physics and biology to cook up delicious but unusual food items. Cocktail ice spheres, transparent ravioli, Oak moss vapor, crab ice cream are some of the exciting examples of this style of cooking, which is gaining favor with Indians as well.

In the Indian context, spherification of the tamarind water which is then presented along with puri is a very clever way to serve the famous snack pani-puri!

The Desserts: “When it comes to Indian desserts, there is a humungous diversity and variety to choose from. Add in the international cuisines, and the array of choices becomes staggering!” Kunal stated. Dessert counter is an integral part of the entire buffet setting. “Depending on the scale of the wedding, there is so much variety available that hosts now have the option of presenting their guests with specially designed programs and booklets to showcase the large selection of food being served each day.”

Dessert bars have an astounding spread of traditional Indian mithais along with international desserts such as Swiss luxury chocolates like Sprüngli and Läderach, French luxury baker Ladurée renowned for its macaroon, specialized cold stone ice cream counters, freshly baked waffle counters from brands like The Belgian Waffle Co., vintage strawberry station, etc. Unique desserts that combine Indian and international tastes, such as rasmalai with strawberry compote and Motichoor cheesecake have also earned their space on the dessert bar.