When to eat oysters to avoid food poisoning? 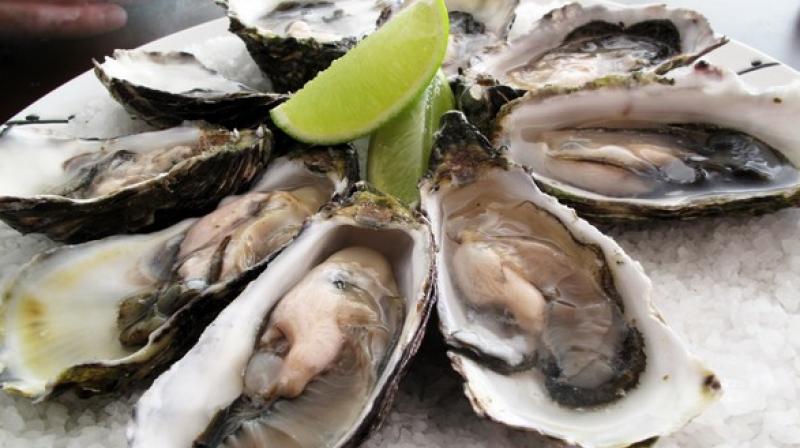 Oysters in the Southeast spawn from May to October and avoiding oyster collection in the summer may help replenish their numbers. (Photo: ANI)

Washington: People have been following an age-old tradition of not consuming wild oysters in months with the letter 'r' that is from September till April for at least 4,000 years to avoid food poisoning, says a recent study.

An analysis of a large shell ring off Georgia's coast revealed that the ancient inhabitants of St. Catherines Island limited their oyster harvest to the non-summer months.

How can scientists know when islanders were collecting oysters? By measuring parasitic snails. Snails known as impressed odostomes, Boonea impressa, are common parasites of oysters, latching onto a shell and inserting a stylus to slurp the soft insides.

Because the snail has a predictable 12-month life cycle, its length at death offers a reliable estimate of when the oyster host died, allowing Florida Museum of Natural History researchers Nicole Cannarozzi and Michal Kowalewski to use it as a tiny seasonal clock for when people collected and ate oysters in the past.

Stowaways on discarded oyster shells, the snails offer new insights into an old question about the shell rings that dot the coasts of Florida, Georgia, South Carolina and Mississippi.

"People have been debating the purpose of these shell rings for a very long time," said Cannarozzi, the study's lead author and Florida Museum environmental archaeology collection manager.

"Were they everyday food waste heaps? Temporary communal feasting sites? Or perhaps a combination? Understanding the seasonality of the rings sheds new light on their function," added Cannarozzi in the study published in -- PLOS ONE.

Cannarozzi and Kowalewski, Thompson Chair of Invertebrate Paleontology, analysed oysters and snails from a 230-foot-wide, 4,300-year-old shell ring on St. Catherines Island and compared them with live oysters and snails.

They found that island inhabitants were primarily harvesting oysters during late fall, winter and spring, which also suggested the presence of people on the island tapered off during the summer.

The seasonality of the shell ring may be one of the earliest records of sustainable harvesting, Cannarozzi said. Oysters in the Southeast spawn from May to October and avoiding oyster collection in the summer may help replenish their numbers.

"It's important to look at how oysters have lived in their environment over time, especially because they are on the decline worldwide," she said.

"This type of data can give us good information about their ecology, how other organisms interact with them, the health of oyster populations and, on a grander scale, the health of coastal ecosystems," she added.