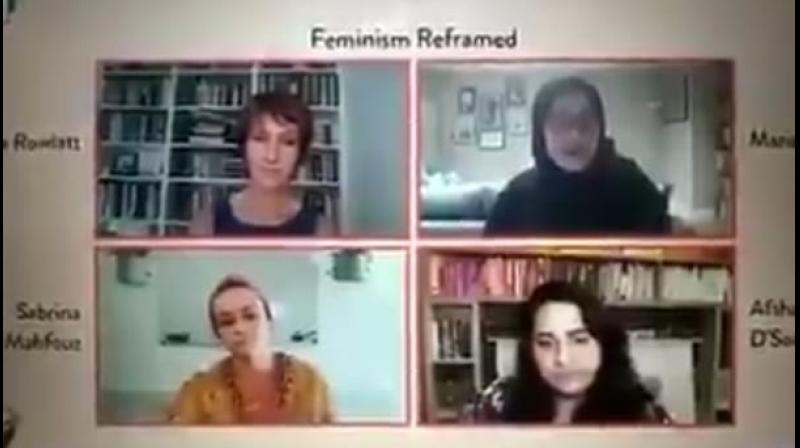 The world’s largest literature festival, JLF, is back again with its lavish intellectual fare, albeit in an online-only avatar. Thanks to the hard work of the organisers, that has not turned out to be limiting or constraining in any fashion.

Saraswati ke bhandaar kee badhi apoorav baat, jyo kharche tyon tyon badhe, bin kharche ghat jaat. With knowledge is associated this counterintuitive fact; that in the places where you expend it, it expands and, in the absence of that, it does verily contract. Novelist and festival co-director Namita Gokhale opened the 14th edition of JLF with this couplet from the quill of Vrind, the 17th century Marwari saint.

Imagination is more important than knowledge. Knowledge is limited. Imagination encircles the world. That is what Albert Einstein believed, and that is the connect between science and the arts. In the very next session, Tilly Blyth, head of collections and principal curator at the Science Museum in London, came out with this mind-expanding thought.

India is a little bit like Italy but with a billion people, said quantum physicist Carlo Rovelli, writer of Helgoland, during a scintillating conversation with astronomer Priyamvada Natarajan. Rovelli is the founder of the loop quantum gravity theory. What brought you to Buddhist philosophy as a way of understanding these complex concepts, said Natarajan to Rovelli. Rovelli said, quantum mechanics tell us three things. Two of them are relatively simple and one is mysterious. Quantum physics tells us about granularity. It tells us that the space in which we live is granular, not continuous. The second thing it tells us is that this space consists of things that move randomly. The third and mysterious thing is that quantum mechanics is a theory that tells us about not how things are at a given place and time but what you are going to see. If you try to fill in the gaps in-between it does not always work. So the mystery of quantum mechanics is still open. And that is where my interest in Buddhist thought emerged. It is the breakdown of determinism and the fact that an observer can alter the results just by being present, that is what is interesting, Natarajan summarised quite cogently. Nagarjuna, the third century Mahayana philosopher, said that all notions are provisional after a point. There is no ultimate essence to anything, Rovelli explained. There are no qualia, Natarajan agreed. An object manifests only in relation to others. Without them, the object is “empty”. Is this what is then meant when one is told not to take anything too seriously?

S. Hareesh’s controversial novel, Moustache (original Meesha) has won the 2020 JCB Prize for Literature. It is all about the fascination of the familiar, says Professor Tejaswini Niranjana, depicting as it does life in the Kuttanad region of Kerala. To her credit, translator Jayasree Kalathil ably conveys the mesmerising quality of Hareesh's prose to non-Malayali readers. But author Aruni Kashyap says it is also a novel that misbehaves. We expect novels to run in a linear way, to follow one story or one character. Here, there are multiple worlds, multiple stories, multiple protagonists. And in many ways that is the Indian reality, it is very polyphonic, multi-layered. What gets published in the British, American and Canadian literary markets, kind of, decides how a novel should be. But growing up reading Indian literature one sees how we have adapted the European form to ourselves. One of the big things is that we never have a single character, he informs his audience. Interestingly, the introduction to Hareesh’s book has the following, liberating, lines: Novels are free countries. You cannot take responsibility for what your characters do.

The first amendment to the Indian Constitution in 1951 started the tradition of Indian governments using executive power to subdue the judiciary, posited journalist Karan Thapar to which historian Tripurdaman Singh agreed. Singh has recently published his Sixteen Stormy Days: The Story of the First Amendment of the Constitution of India. The justification about “the will of the people” that was used by Jawaharlal Nehru (to curb free speech in order to abolish zamindari, introduce caste-based reservations and censor publications deemed as national security threats) really set a trend from which there was no going back, he added. Sedition seems to be one of the favourite instruments of the Narendra Modi government, but it was pretty favourable to previous governments as well, said Thapar. In 1950, the Punjab high court famously read down the law of sedition in the Master Tara Singh case and the first amendment in 1951 reintroduced the law of sedition. Thus Nehru, Sardar Patel and B.R. Ambedkar, the three people that we regard as champions of democracy don’t emerge brilliantly from this story, he concluded.

Singh responded: Nehru is a complex figure. He had moral uncertainties. But he had so much public support that he did what he wanted. It was juxtaposed by a very pedantic commitment to the procedures of democracy, he was, for instance, very fastidious about attending parliament. Ambedkar, who only resigned several months after the passing of the amendment, was a bit of a misfit in the Nehru government and did not carry too much weight, did not get much of a say in matters. He probably went along because of the social justice aspect of the amendment. Patel considered free speech as irrational exuberance. Nehru had used the powers of Article 392 to pass the amendment, much the same way as Modi used Article 370 to read down Article 370, Thapar commented.

The paradoxes of the life of the nineteenth century Bengali poet Michael Madhusudan Dutt are movingly rendered in a play, titled Betrayed by Hope, co-authored by Namita Gokhale and Professor Malashri Lal. You have made Jaipur famous not only in Jaipur but the world over, given it a brand name really, Lal said to Gokhale at the panel discussion. Interestingly, Dutt, too, has a connection with Rajasthan. The play that he wrote called Krishnakumari is based on a legend that is coming to us through Colonel James Tod’s Annals and Antiquities of Rajasthan. Why Dutt now?

What if I were to invite Dutt to JLF, mused Gokhale. How would he behave? How would we handle him? I am sure he would be a difficult writer to look after, but a brilliant speaker. I am obsessed by the writing process. In 2004, I wrote a review of Heart of a Rebel Poet as well as another book on Dutt, and I resolved there and then to do a play around them because the letters in the Heart of a Rebel Poet were automatically, naturally, spontaneously, forming a sequence of five acts. We have tried to pay a tribute to the great genius of this man overshadowed by the dramatic and colourful and ultimately tragic details of his life.

The Booker-shortlisted Adam Fould’s new novel, Dream Sequence, is about the brutality of fame and what happens when fandom turns to obsession. Dream Sequence explores what it is to live in our current moment, with its porous borders between the inner and the outer life. Foulds was asked by Elaine Canning to talk about the blurring of the dream and the magical with the real in the novel. In the word, dream, we have the double meaning of ambition, in the sense of something that we aspire to and the sense of something that is unreal, a fantasy. Both these meanings are captured in the lives of the two main characters. In life, too, there is more and more the saturation of fantasy and the liquefying of reality in people’s lives that is happening in so many ways, in terms of our online life and political life, where we are entering a kind of dream sequence very frequently. Unlike in earlier times, today, with social media, we can track the celebrities we are interested in real time, in terms of where they are and what they are doing, and we can interact with them and have them respond to us, and yet it is all saturated with fantasy and does not really mean what we might hope it could mean, Foulds said. His observations were immediately relatable.

In her chat with author Shobhaa De on her autobiography, Unfinished, actor Priyanka Chopra Jonas spoke highly of her co-actor in the film, The White Tiger, Adarsh Gourav, as well as the success of the OTT (over-the-top) platform. Adarsh has done tremendous work and might be nominated as one of the first Indian leading men, she averred. But Chopra Jonas has an unfinished agenda. It wasn’t in people’s consciousnesses that a brown person can be the lead of the show, she said to De. Literally, there used to be a saying in Hollywood during that time that black and brown movies do not work for audiences outside America. This was the insider’s myth and, incredibly, we have been able to change that in just five years’ time. The White Tiger is probably historic. It has an all-Indian star cast that was the No. 1 movie in the world on the largest streaming platform in the world. That’s what I want to normalise — seeing people who look like us. We have the largest movie industry in the world. Why can’t we have that kind of representation in English speaking entertainment?