Relish the real taste of Vidarbha

Minks is a restaurant in Andheri East that serves Saoji cuisine, known to be fiery and meat-heavy. 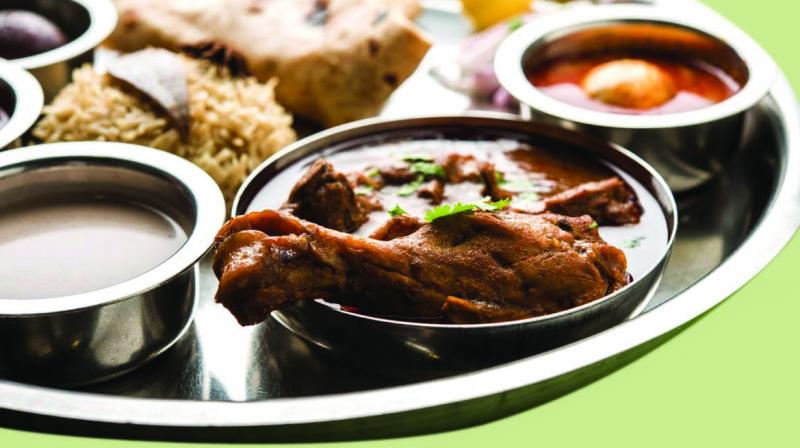 Saoji cuisine comes from the Halba Koshti community that is native to the Vidarbha region.

People from Nagpur rave about their local Saoji cuisine — fiery and heavy on meat. Unfortunately, in Mumbai, the only Maharashtrian food that Nagpuris have to rely on is the popular rendition on “spicy” Kolhapuri curries and, if you’re lucky, maybe some Agri mutton.

After years of searching for Saoji food in Mumbai, I finally found one restaurant that serves it — Minks in Andheri East. I wanted to try the food as soon as I heard about it, but it was nearing midnight, and the restaurant was about to close. I called anyway. Five minutes in I convinced the restaurant owner to send a parcel home, and half an hour later he dropped off the food himself!

Saoji cuisine comes from the Halba Koshti community that is native to the Vidarbha region. The food gets its distinct taste thanks to the spice mix used to make the curries. Each family has their own spice mix recipe, making the food taste different at each house. This fiercely guarded recipe uses more than 24 spices along with the basic garam masala and red chilli powder. One thing that’s common: to keep the acid content under control, they boil their spices instead of dry roasting before grinding them.

Minks, thankfully, does justice to the food. Located opposite the military café at Marol, this tiny eatery can accommodate just about 15 people at a time. The décor is simple, and you might find it cramped to eat in. To really enjoy the food, parcel it and eat it at home with air-conditioning handy, because this is not for the weak-hearted.

While saoji cuisine is heavy on meat, the vegetarian options aren’t lacking in flavour

The brief menu features traditional fare only. Meat eaters can start off with a dry starter [my favourite is mutton and khur (paya)], which pairs well with fried garlic that is said to enhance the heat. Minks serves its curries in single-portion plates. Order a crispy chapatti with your mutton Saoji plate – crush the chapatti, pour the curry over it, and top it off with onion and fried garlic. Be warned: the food looks extremely oily, but that is exactly how it is supposed to be.

While Saoji cuisine is heavy on meat, the vegetarian options aren’t lacking in flavour. A must-try dish is patodi curry, which subsitutes besan cakes for the meat while using similar masalas. The vegetarian menu, in fact, consists of things we Nagpuris eat at home, such as a simple daal kanda, tamatar chutney et al. Every Vidarbhi wedding will have the eggplant curry that is on the menu at Minks as well.

The food is slow-cooked, allowing the meat enough time to absorb the flavours and enhance the taste. Minks makes its food in limited quantities to ensure the taste is uniform with everything they serve, so make sure you order well before they run out of food.

This recipe uses more than 24 spices along with the basic garam masala and red chilli powder.