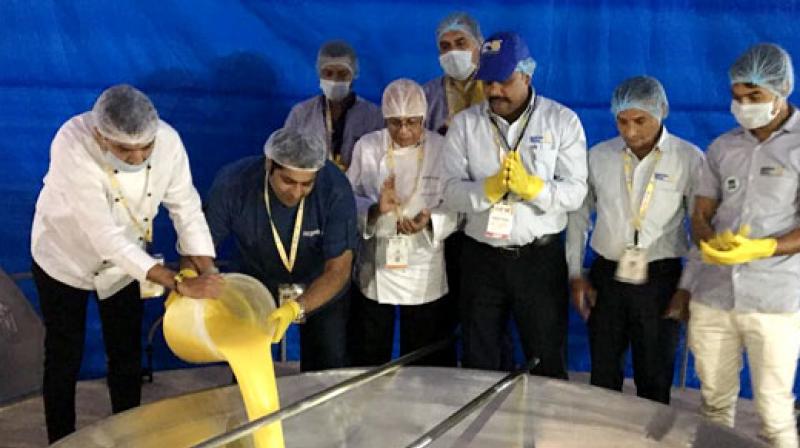 A team led by renowned chef Sanjeev Kapoor today cooked about 800 kg khichdi — a traditional dish — at the World Food India event here in an attempt to enter the Guinness World Records and promote the dish as Brand India superfood.

Yoga guru Ramdev Baba put crowning ‘tadka’ in the dish which was steam-cooked in a giant wok weighing around 1,200 kg. Officials from the Guinness World Records were yet to ascertain if a record had been made.

“Khichdi is a healthy and superfood. It is a solution to those depending on food supplements. It is rich with all nutrition,” Baba said after putting tadka in the dish.

Promoting khichdi as a ‘Brand India’ food is a good step towards promoting healthy superfood not only domestic but also international market, he added.

Food Processing Minister Harsimrat Kaur Badal Minister, who also lent a hand in the cooking of khichdi, said, “It is a wholesome food as it contains most of the nutrients. It also symbolises the country’s unity in diversity.”

The dish was prepared using multigrains like rice, pulses, coarse cereals and vegetables. The night-long preparation was supervised by chef Sanjeev Kapoor. The khichdi will be distributed to orphans by Akshaya Patra Foundation and Gurudwara to about 60,000 people.

Qureshi, master chef at ITC Hotels, praised the government’s initiative to promote Indian foods like khichadi and recognise the talent of Indian chefs. He said that new-age chefs are innovating this dish across the world and is being consumed in an interesting way these days.

The mega khichdi preparation was part of the ‘Great Indian Food Street’ at the global event that features traditional food from more than 20 states states.