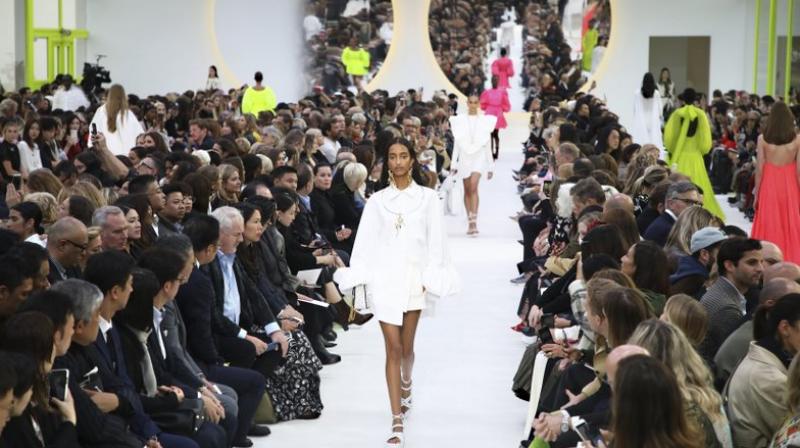 Voluminous white shirt-dresses served as a tabula rasa, a blank canvas, which Piccioli then adorned with delicate gold jewelry, such as a round necklace with a figurative bird pendant. (Photo: AP)

While at Givenchy, “Game of Thrones” star Maisie Williams looked very much the part, arriving in denim at a collection that celebrated the world’s most famous blue cotton fabric twill.

Here are some of Sunday’s Paris Fashion Week highlights:

“By subtracting colour, shape and volumes come to the fore,” Pierpaolo Piccioli said. With this mantra, the Italian Valentino designer composed a refined and thoughtful opus for spring that took the storied house in a more focused direction than last season’s chunky butterfly embroideries.

Here, the designs blossomed via their simplicity in white and eye-popping color with flashes of gold. The first looks were all white.

Voluminous white shirt-dresses served as a tabula rasa, a blank canvas, which Piccioli then adorned with delicate gold jewelry, such as a round necklace with a figurative bird pendant. At times, the shirts’ high collars and starched feel felt ecclesiastical, while their voluminous sleeves almost angelic.

The collection maintained this arresting simplicity throughout, even when bright color was explored in an electric lime silk gown with a beautiful floor-length trapeze silhouette. It was gently ruched at the collar with a 1970s necktie detail, and was worn by a makeup-less model who resembled a divinity with myriad gold sequins around the eyes.

For spring, Piccioli took us to heaven.

The house of Valentino, whose Sunday show was staged inside the grounds of Les Invalides, sent out a flurry of messages to guests alerting them to traffic concerns and to arrive extra-early.

The warnings were sent because Les Invalides was also the site of a public ceremony on Sunday afternoon in memoriam of former French President Jacques Chirac who recently died.

One bicycle-riding editor in an impractical, long layered designer dress wore eccentric ankle clips to stop her look catching in the chain. Some others simply walked kilometers from the previous show in the drizzle.

But the most popular option seemed to be one of the newest forms of transport taking Paris Fashion Week by storm: Rent-a-scooters. Companies such as Lime have capitalised on the mayhem and offered fashion week guests special offers for their services for the duration of the season.

Faded past meets denim at Givenchy

In a more commercially minded collection than usual, British designer Clare Waight Keller’s mission statement was to merge a “tough urban energy” with the “patina of time.”

Faded denim — of which the show invitation was fashioned — provided the urban edge in loose and frayed cropped pants or a funky boho skirt with inset fabric, while historic gowns in brightly colored 18th century prints referenced the styles of a bygone era.

But much of the diverse 63-piece collection didn’t fit these themes. Instead, they channeled a wearable — and sometimes play-it-safe — ’70s vibe that recalled Waight-Keller’s days at the design helm of Chloe. There were stylish moments: For example, the kick on heavy pleated floor-length silk skirts that sometimes peeked out — boho style — from beneath low hanging tops.

Though it was lost on guests if the imaginative presentation was a comment on climate change, the inventive styles made a statement of their own. Browne injected his trademark contradictions onto his tight bread-and-butter suit styles.

Giant bowling shoes redesigned as dolphins led on to truncated shells of crinolines. These historic garments cut a surreal silhouette when placed below a striped skirt-suit with dolphin motifs, with the skirt was hoisted up to the bust.

The skeletal crinolines were then fleshed out as the show progressed with layers of tweed fabric evoking Marie Antoinette or perhaps the Snow Queen. Large blond and dark wigs added to the queenly vibe — accessorised with an occasional tulle veil in a nod to bridal couture.

Browne continues to redefine Paris Fashion Week with displays that are as much about the visual concept as they are the ready-to-wear.

There have been fits and starts since the famed house of Elsa Schiaparelli — the archrival of Coco Chanel — was relaunched some six years ago.

Now, with designer Daniel Roseberry in place, the house associated with couture took one more trepidatious step into ready-to-wear. The outcome left guests inside the Place Vendome presentation smiling.

This season plunged into the universe of the eccentric house founder, who, the brand informed guests, once swallowed flower seeds to try to become a flower as a little girl.

This naivety and playfulness were apparent in all of the 20 looks: From a beautifully-proportioned signature shocking pink geometric pant suit, to a soft jacket with an eye-popping yellow and orange fringe.

The designs were mainly structured and sophisticated with hints of Surrealism. (Elsa was friends with Salvador Dali.) A thick snaking serpent in gold made for a standout necklace, and the house said it had scanned human hair, pool tiles, and even brown paper bags in order to print them all on silk satin.

Roseberry said he channelled “Surrealist tropes of displacement ... the everyday and prosaic meeting the exquisite and rare.”