From red light to spotlight

In a first for a fashion show in the city, models will make way for daughters of sex workers to take to the ramp in designer finery. 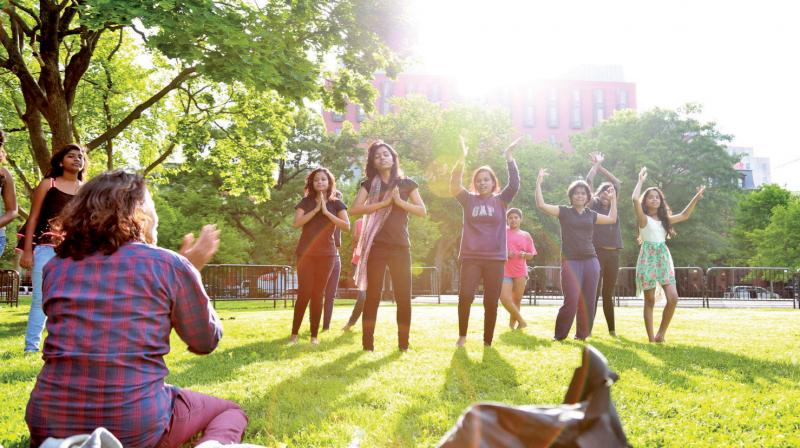 The LFW this year has collaborated with Kranti, an NGO that empowers girls from Mumbai’s red-light areas, to be agents of social change.

Twenty-year-old Sandhya Nair, who takes to the ramp at Lakme Fashion Week later this week, is overwhelmed by the idea of the event. As the daughter of a sex worker from Kamathipura, who was once denied admission  in a school, due to her background, she never thought there would be a day when she would walk the ramp in designer clothes. Sandhya, along with her friends from Mumbai’s notorious red light area, will narrate their tale in a way never done before. The LFW this year has collaborated with Kranti, an NGO that empowers girls from Mumbai’s red-light areas, to be agents of social change. Pitching in the effort is designer Mandeep Nagi and together they will present a fashion collection through an interactive performance.

“I don’t know how people will react or what kind of help we will get, but one thing is for sure — we want to tell people that we are just like them; we are no different,” says Sandhya.

Mandeep, who will be making her debut at LFW this year has always maintained that her clothes are not for your typical ‘models.’ With these girls, she has says she has finally found someone who depicts the language of her work perfectly. She shares, “I came back after meeting the whole bunch at Kranti and the feeling was so overwhelming. It’s not going to be a quintessential ramp walk, but a presentation, where the girls would be enacting and talking. I have decided to keep the collection natural with handloom fabrics and simple designs. There are eight to nine girls who will be wearing saris, kurtas, palazzo pants, tops and trousers and a variety of clothes.”

Like Mandeep, the girls are equally excited. They have been practising their act for over a month at their shelter in Santacruz. Asmeeta Katti, all of nineteen, however, is not new to the arc lights.  She has earlier performed a play, Lal-Batti Express before an audience in the US. A shortened version of the same, cut to suit the LFW format will be performed on the ramp. She says, “I’m excited and nervous at the same. It is a huge platform for us, and I’m very excited to wear designer clothes. I had only heard of one designer before, and that’s Manish Malhotra. I can’t wait to wear the clothes that Mandeep has designed for us,” she shares.

Another team member, 18-year-old Danish Shaikh adds, “We will be sharing our stories and the things we have been through. That means essaying the roles of some girls we know, as well as our mothers. We have performed the play in US  but since the time span here will be less, we have shortened it to 25 minutes. Everyone who has heard of Kamathipura or been there has only one perception of the place, we will be showing them Kamathipura through our eyes.”

About the line Mandeep adds,  “My collections are not typical ramp clothes and professional models don’t matter to me. The stories of these girls are so inspiring and heart-touching that I feel lucky to have got this opportunity. Their spirit is amazing and the confidence they radiate bring a sense of happiness to you,” says Mandeep, who for one of her previous collections, had chosen Kamla, a housemaid, as the model.