Meghan Markle told the photographer to keep the photos as natural as possible and not to edit the freckles out. 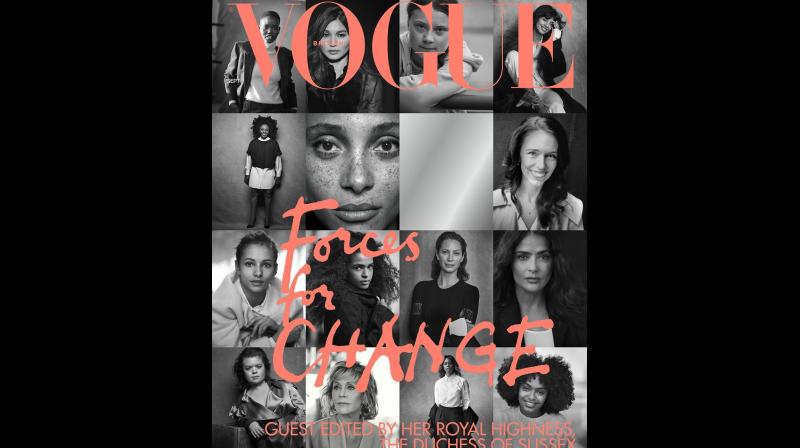 The women for the cover story were chosen on the basis of their support to various causes like climate change, wellness and mental health. (Photo: Instagram)

She was the first royal to ever guest-edit the fashion magazine, a holy grail for all fashion-enthusiasts. Meghan chose the women who were featured in the women and had another special request for the photographer. The photos were to be kept as natural as possible. “My instructions from the Duchess were clear: ‘I want to see freckles!’. Well, that was like running through open doors for me. I love freckles,” said photographer Peter Lindbergh to DailyMail.

Lindbergh had previously worked with the Duchess on the 2016 issue of Vanity Fair where she was featured. In that issue, Meghan Markle had spoken about her romance with Prince Harry for the first time. He was thus chosen by the Duchess and Vogue editor-in-chief Edward Enninful to shoot for this issue.

The royal, a former actress and self-proclaimed feminist, was too asked to feature on the magazine cover, but she declined, saying it will seem too ‘boastful’. The photos were shot across seven continents, spanning over several days in June. Shoots were simultaneously happening in New York, Sweden and London.

Shortly before the shoot commenced, Meghan called Peter and explicitly stated that freckles and all must be visible. Meghan previously spoke about this topic as well, “To this day, my pet peeve is when my skin tone is changed and my freckles are airbrushed out of a photoshoot. For all my freckle-faced friends out there, I will share with you something my dad told me when I was younger: 'A face without freckles is a night without stars.”

The women for the cover story were chosen on the basis of their support to various causes like climate change, wellness and mental health. New Zealand Prime Minister Jacinda Arden, climate change campaigner Greta Thunberg and transgender actress Laverne Cox were few of the women featured in the issue. A mirror was also included on the cover page, to make the reader feel empowered.