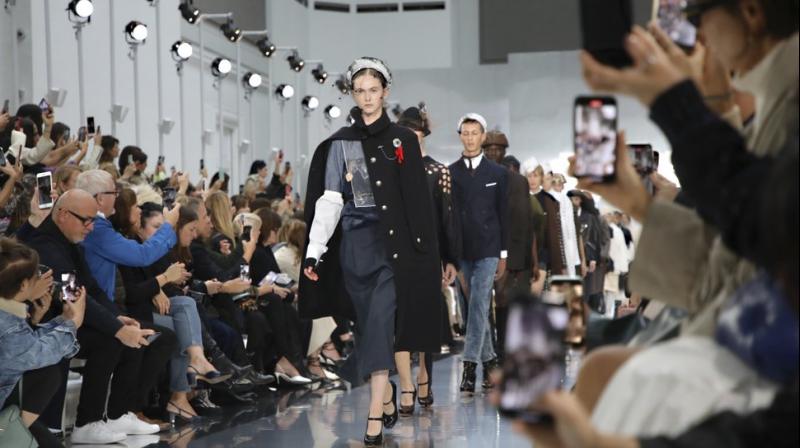 Paris: There were quirks and provocations galore at the second major day of Paris Fashion Week collections, as John Galliano showed why he’s still a creative force to be reckoned with — and model Bella Hadid stunned front row guests.

Here are some highlights of Wednesday’s spring summer 2020 shows.

Fashion icon John Galliano outdid himself this season with one of his quirkiest and most creative displays to date for Maison Margiela. The collection’s starting point was the uniform styles of World Wars I and II, but it was encyclopedic at heart.

Much like the soundtrack that flitted from Marlene Dietrich to electro, the 39-piece show defied definition.

Only a couture master such as Galliano can successfully pull off a collection that paired, for instance, a nun’s habit with a voluminous biker jacket in the same stylish look. There was method in the madness: Holding the display together were lean, and often buckled waists, oversize proportions and unexpected plays of depth through layering.

Despite being at the top of the industry for two decades, this season demonstrates that Galliano is still a designer who can pack a surprise.

Bruno Sialelli, Lanvin’s fourth designer in four years, was in a relaxed and playful mood for his sophomore outing at the storied Parisian house. Gently sloping geometry, both in the shoulder and in hats with exaggerated fisherman-style ear flaps, defined much of the quirky aesthetic.

By pure coincidence, the angular bend of umbrellas clutched by fashionistas in the front row as it rained exactly matched the geometry in the clothes — in a detail that was not lost on editors.

In contrast to the gray Parisian skies at the outdoor garden venue at Musee du Quai Branly, the clothes themselves — in pastel blue, deep carrot, champagne and pale yellow — were fashioned for spring. Asymmetry and trompe l’oeil styles produced the show’s strongest looks.

In one loose sporty dress, horizontal Breton stripes gathered in waves at the hem creating the false impression of movement. But sometimes the looks, with their myriad necklaces, prints, handbags, belts and hats, felt a tad busy.

Bella in the spotlight at Mugler

It was none other than model-of-the-moment Bella Hadid causing the furor. She strutted out powerfully onto the runway in an incredibly provocative ensemble: A cropped tuxedo on top of sheer black lingerie that left little to the imagination.

The geometry of the look — its square shoulders and softly ribbed corset-shape midriff — was signature Mugler. But its bold style was also a sign that American designer Cadwallader is very much in control after only one year at the house.

The rest of the 38-look show carried on in the sassy vein. It towed the line between sharp tailoring in shoulders and contrasts of feminine fluidity via silk gowns with flashes of bright color.

But if one word were to sum up the collection, it would be: provocation. Bare midriffs, split-leg gowns, strapped busts and ruched skirts with disconnected peek-a-boo sections at the hemline exposed lashings of flesh.

The art of the invitation

The age of email and rising environmental awareness doesn’t seem to have left much of a mark on the fashion industry’s antiquated system of invitations. Season after season, gasoline-guzzling couriers crisscross Paris to personally deliver ever-elaborate, often handmade, show invites.

Top houses vie for the wackiest or most imaginative idea. French designer Isabel Marant’s invitation was a metal whistle on a long blue cord, while Celine sent out a hardback A4 size book with pages that tore out to reveal figurative wood and metal sculptures that are displayed in the house flagship store.

Chloe’s was by far the most eco-minded: A simple email. In a historic move, a polite electronic evite was sent to its ready-to-wear show guests, who were told: “Kindly note this is the only invitation format you will receive.”