Give your ethnic ensemble a twist with ruffles, and take your style game up a notch! 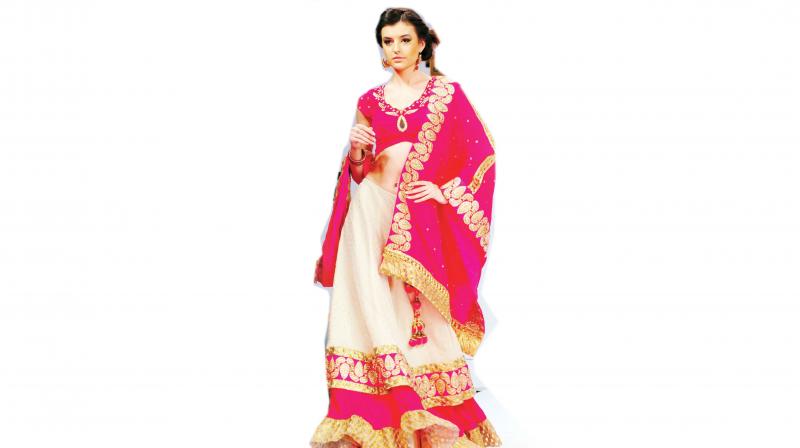 A city model sashays down the ramp in a stylish ruffled number. This picture is used for representational purposes only.

Out with the old and in with the new is a very popular saying which applies to the world of fashion too. Last year, people were going gaga over ruffled tops, but this year, the ruffles have travelled down south — to lehengas, we mean. The ruffled lehenga is a perfect east meets west trend. With celebrities like Shilpa Shetty Kundra and Parineeti Chopra sporting this look, the ruffled lehenga is undoubtedly striking, and statement making.

The plain old traditional desi skirt has been there for aeons. Now, the ruffled look gives a really fresh take to your ensemble and a touch of whimsicality too. Fashion influencer Zohara Jamal says, “It is a nice and interesting change from the regular lehenga. When a lehenga is fitted at the hip, and flowy at the bottom, it gives a mermaid feel to the look. Unlike some of the new trends, ruffles have always been in rotation in the fashion world. The key to nailing this trend now is to improvise properly.”

What makes this outfit stand out are its accessories too. “For a traditional affair, a ruffled lehenga with either crystals or embellishments with either a shirt or a crop top works well,” adds designer Balaji Manckam. And one can even team it with contemporary, giving it a modern feel. “A yellow lehenga that does not have a lot of embellishments will work great with a white short top and a belt since they are quite popular now,” suggests designer Reshma Kunhi.

While working with ruffles, it important not to overdo it. She adds, “Ruffles can be used all over. Ideally for anyone who wants to follow this trend, just an element in the wardrobe should have ruffles. The type of accessories you wear depends on the work or embellishment on the lehenga. Now, a days, people are moving away from matching their jewellery to their outfit. Mix and match is the norm now. Jewellery also depends on the neckline of the top. If it is a closed neckline, big and bold earrings will look good.”  Zohara also suggests wearing a maang tikka and big earrings for a more traditional look. Heels should be considered as they tend to elongate one’s look, but for a more casual setting, flats or jootties can we worn. “Ruffles lehengas work well with soft flowey fabric. Fabrics like tule, chiffon, soft organza, crepe, dupion silk and georgette can be used to make ruffles but raw silk must be avoided as that makes it very stiff,” she says.