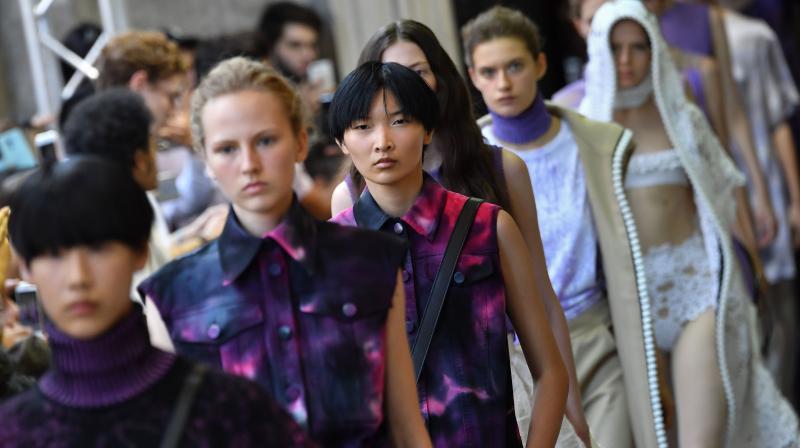 Models present creations during the Cristiano Burani fashion show, as part of the Women's Spring/Summer 2019 fashion week in Milan, on September 23, 2018. (Photo: AFP)

The brand has become one of the luxury world’s fastest-growing in recent years - propelling an earnings bounce at parent group Kering (PRTP.PA) - thanks to its flamboyant reinvention under designer Alessandro Michele, showcased at elaborate catwalk displays.

The Paris show - a one-off for the label which normally presents its collections in Milan - was also an exercise in the weird and wonderful, set within Le Palace, a famed former nightclub and 1970s celebrity haunt turned theatre.

A video projection of almost macabre, anxiety-inducing scenes evoking the confines of an asylum set the tone before models strutted up to a stage in an array of frilly, glitzy gowns or fringed jackets and tiny shorts for the men.

And the sinister soundtrack interspersed with distant screams gave way to Birkin’s performance of her 1983 single “Baby Alone in Babylone”, as the spotlight suddenly found her in the audience.

Gucci’s recent success, with younger shoppers in particular, has fuelled questions over how long its momentum can last.

The brand recently outlined its ambition to one day overtake LVMH’s (LVMH.PA) as the world’s biggest luxury brand by sales, including with more store facelifts and by further developing its e-commerce operations.

High margin leather goods are central to its strategy, and the brand’s latest collection for spring and summer 2019 featured several new bag models - including chunky backpacks.